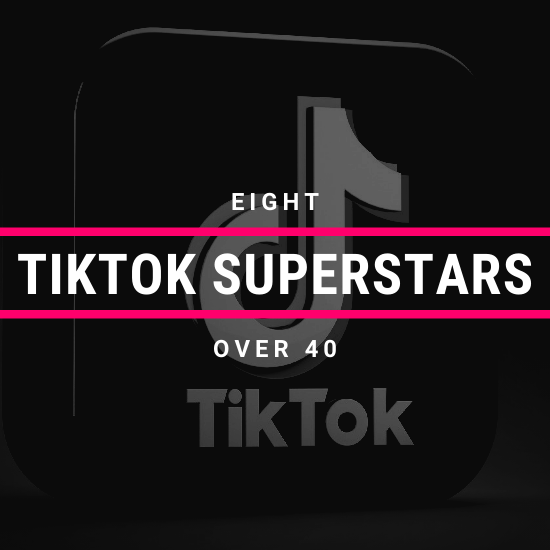 TikTok is the current music industry maker — with music and content going viral seemingly overnight, the app can be extremely useful for growing your audience. However, the common misconception is that the TikTok audience is only for Gen Z… we’re here to tell you that this is NOT the case. Plenty of musicians, young and old, are making a career on the platform through consistent, strategic posting. We deep a deep dive to find the TikTok superstars over 40 who are killing the game.

This article is meant to inspire you, to demonstrate that anyone and everyone can kill it on TikTok. So without further ado…

Here are 8 TikTok Superstars over 40 using the platform to spread their music and grow their fanbase.

(And when you’re properly inspired, checkout our Essential TikTok Tips and Tricks to get you started actually posting on the app).

Algie Powers is a 67 year old singer-songwriter residing in Salt Lake City, Utah. By posting a diverse array of covers, from Twenty One Pilots “Blurry Face” to Fleetwood Mac’s “Landslide,” Powers has amassed over 600,000 followers on TikTok, and over 7.8 million total likes on her account. As stated on her ReverbNation profile, Powers did not begin delving into her musical career until after raising her two children. On her own website’s about section, she states “Finished raising her children. Was finally ready to run off cockamamy to chase her musical dreams. Thought she missed the boat. TikTok came along.” Even though she was unable to chase her dreams in her youth, TikTok allowed her to follow her passion and gain a large following despite her age. (@algiepowers)

TIP: Remember, when you post music on TikTok, be sure to post it as an original sound! 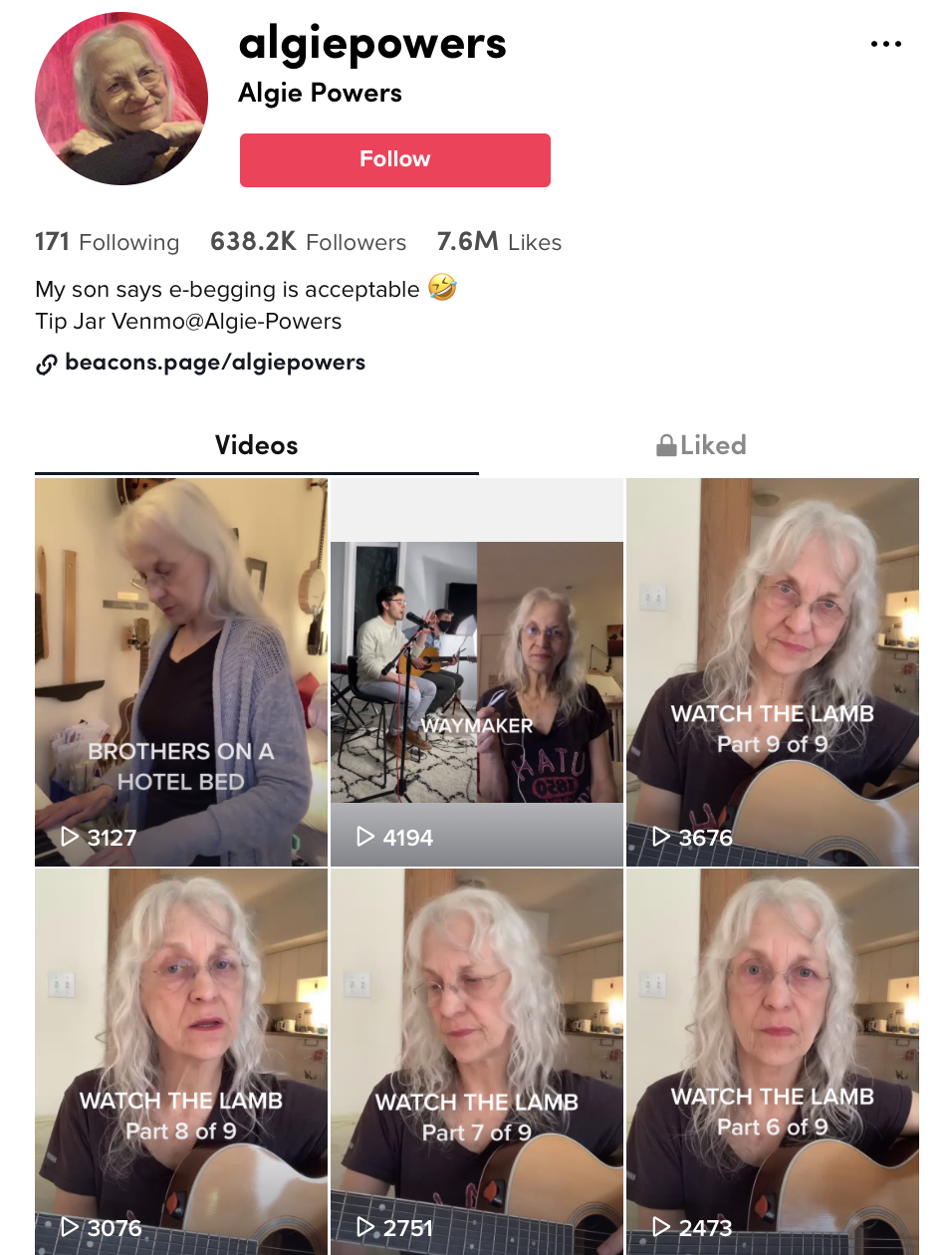 Robin Henkel has been a performing blues musician since 1973. Opening for many of the greats, such as B.B. King and Bonnie Raitt, but never got that personal jump. He only began posting this January, however his pure feel for blues has gained him over 12,000 TikTok followers and over 122,000 likes. His rawness in performances and technical skills with chickin’ pickin’ and a slide have caused him to quickly gain a following that is sure to only grow. (@robinhenkelblues)

TIP: In the screenshot of his video below, you can see that he used the reply to comment feature to connect with a fan in his following! This is a great way to create content that your audience is excited about. 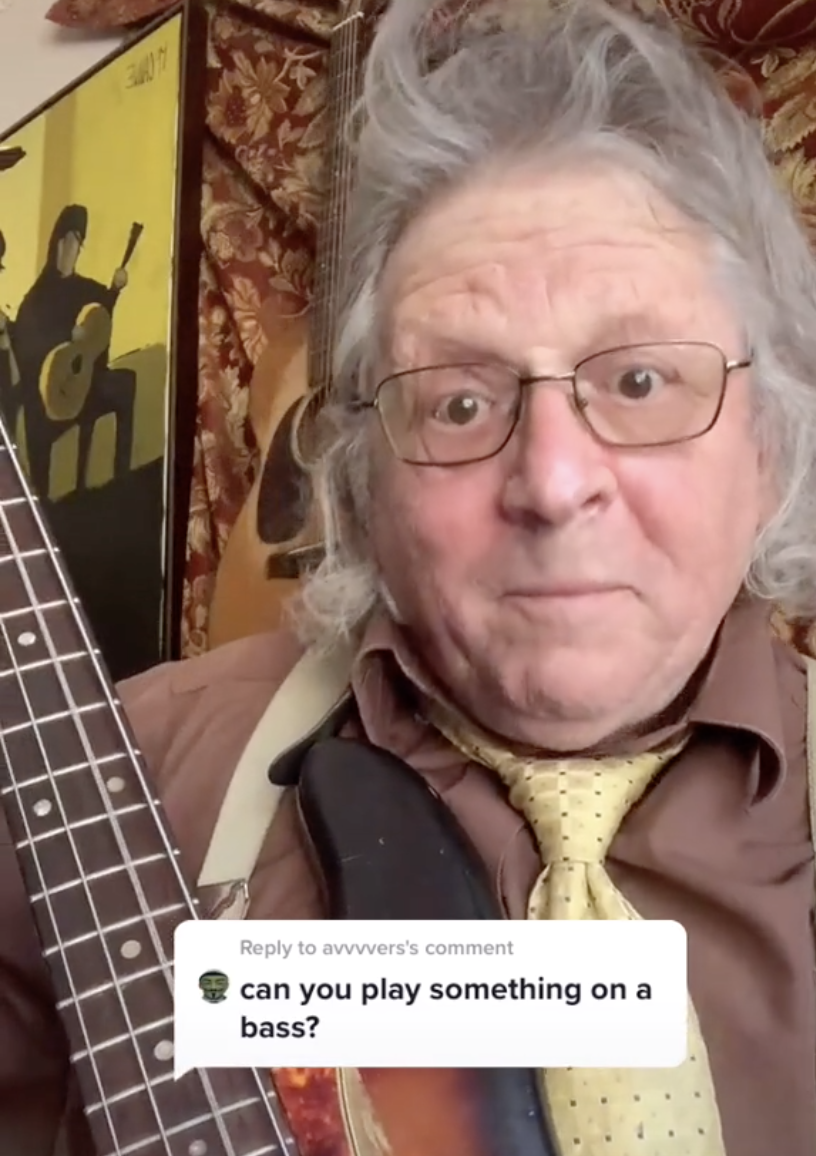 Ellen M is a TikTok Superstar pianist who has grown her account to over 171,000 followers and over 2 million total likes since starting to post in July of 2020. By taking follower requests for covers and doing interactive duetable instrumentals, her account grew rapidly. She’s found her niche playing piano covers of popular anime instrumentals, in addition to her “ADHD Musician Thoughts” series. The combination of covers, improvisation, and relatable musician content has created extreme growth for her account. (@ellenmpianist)

TIP: As you can see below, Ellen creates not only music content, but other types of videos that showcase parts of her life such as “ADHD Musician Thoughts” or providing advice for other TikTok superstars regarding “What To Do When Views Are Down.” It’s important to diversify your content! 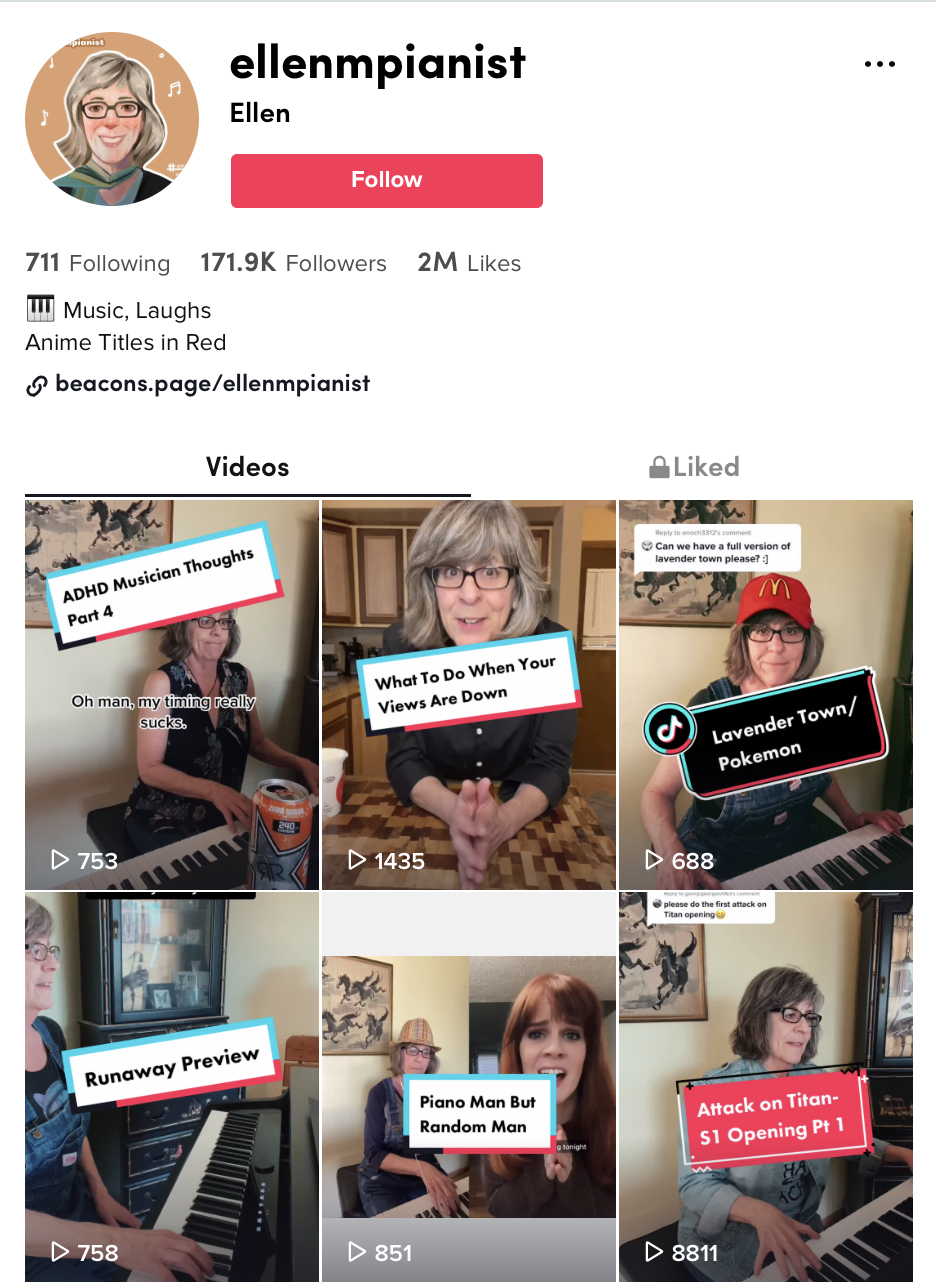 Well established in the jazz world, Ron Jackson has expanded his reach with the use of TikTok. Creating his account in July of 2020 and posting a wide array of content, Jackson has grown his following to over 26,000 followers, with an accumulation of over 258,000 likes on his account. From duetable guitar backing tracks, to original music, to trips to Guitar Center, Jackson keeps his account interactive and engaging. By keeping his followers constantly involved, Jackson continues to grow. (@ronjacksonmusic) 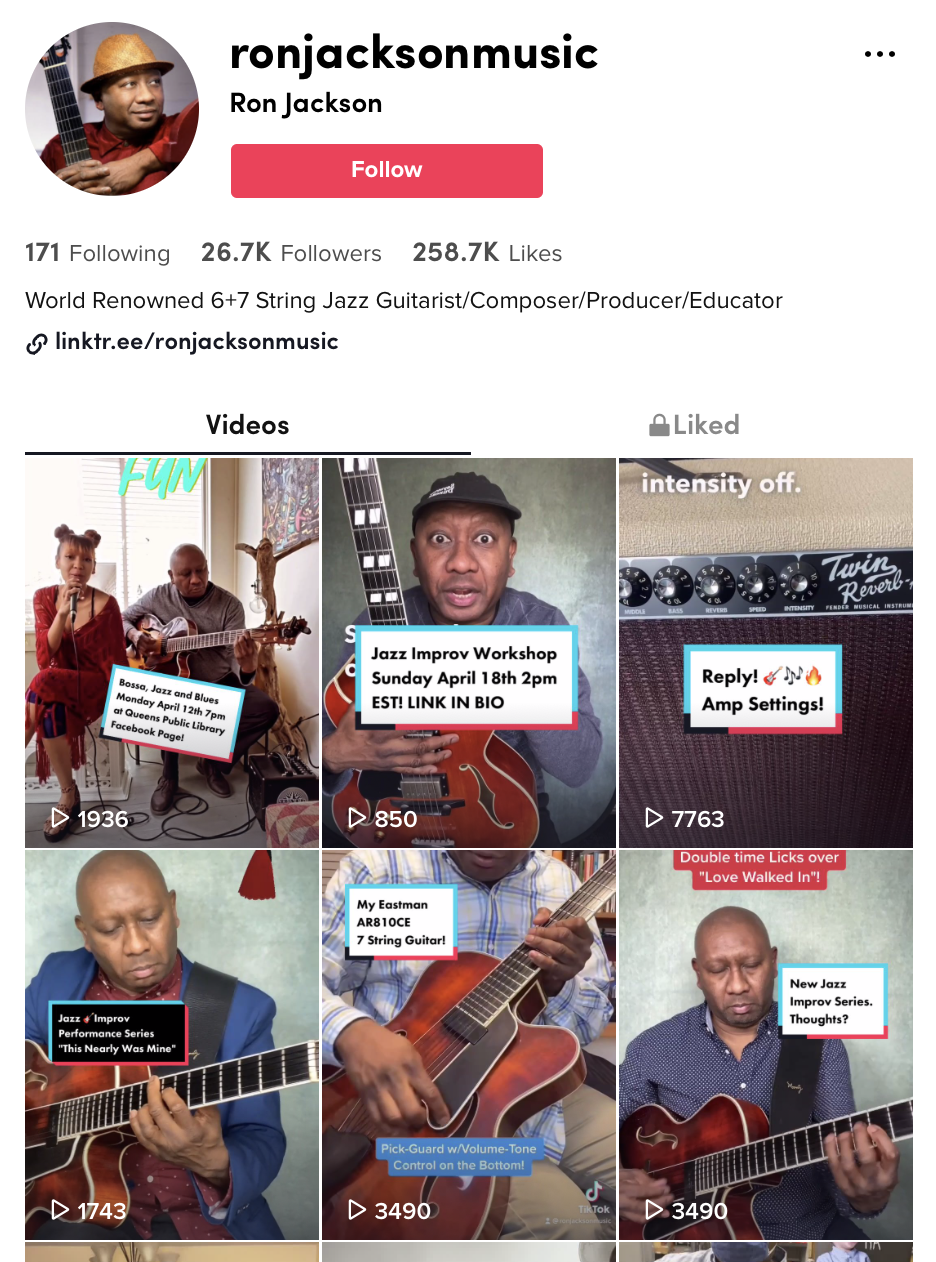 Hal Walker is another musician who has had a passion for music his whole life. However, TikTok has blown up his musical outreach to over 600,000 followers with over 11 million total likes on his videos. The multi-instrumentalist showcases unique instruments such as the hand pan, hulusi, and khean, in addition to the more typical covers and educational music TikToks. By interacting with not only his followers, but also other TikTok superstars, he has been able to create constant content that keeps his followers engaged and interested. (@banakula)

TIP: Use hashtags to your advantage. Use 3-4 tags related to your content and 1-2 trending tags on every post for maximum reach! As you can see below, Hal uses this mix of tags, with 6 related to his content of him performing an indigenous instrument from Thailand (#khean #laos #thailand #hmong #isan #isaan) in addition to a trending tag (#lowkeygliding) and his own personal tag (#halwalkermusic).

Slightly different than our other examples, Harry Arbuckle just released his first song on April 4th, 2020. With over 282,000 followers and over 4 million total likes on his TikTok account, Arbuckle blew viewers away with his powerful rock vocals. By combining comedy and music, Arbuckles followers love his enthusiasm. He consistently posts throughout the week, often duetting other content creators and replying to viewer comments, taking their comedic requests. The energy conveyed through Arbuckle’s videos makes it clear why people stay for more content! (@happyharryarbuckle)

TIP: Duet videos for double the reach, as this associates you with the other account and their trending sound! 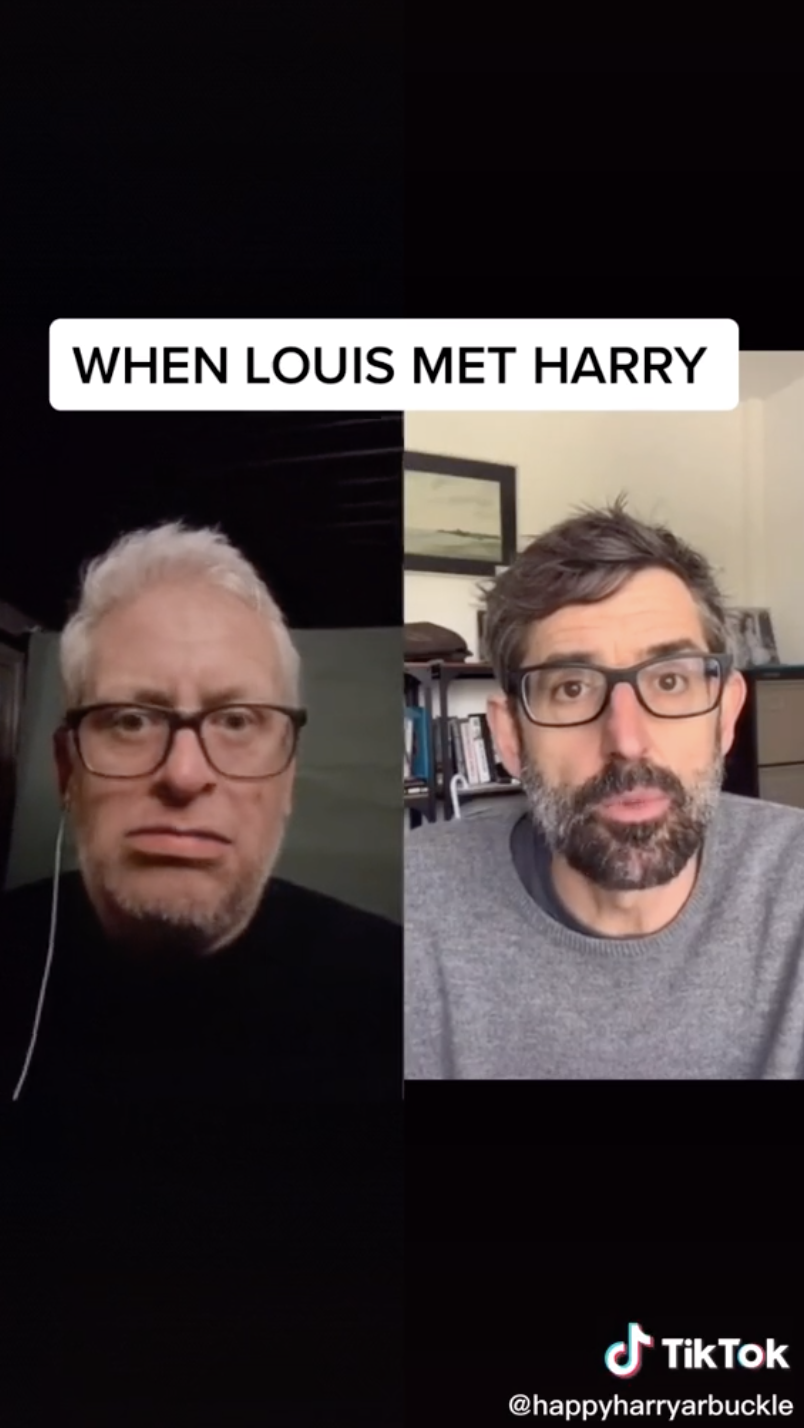 This drummer mostly does duets with other TikTok superstars, creating a full band sound for anyone posting solo covers on the app. Unlike our other creators, Lusardi has not released his own music, at least that he has advertised to his followers. Lusardi has only begun posting regularly a few months ago, but now posts almost daily, sometimes with multiple videos a day. He has grown his following to over 100,000 with almost 3 million likes on his account, so maybe there will be more announcements in the future! (@thefarpost)

TIP: Create fun calls to action for your followers/viewers to engage them with your video content! Here Mariano calls for other guitar players to duet his drum work. 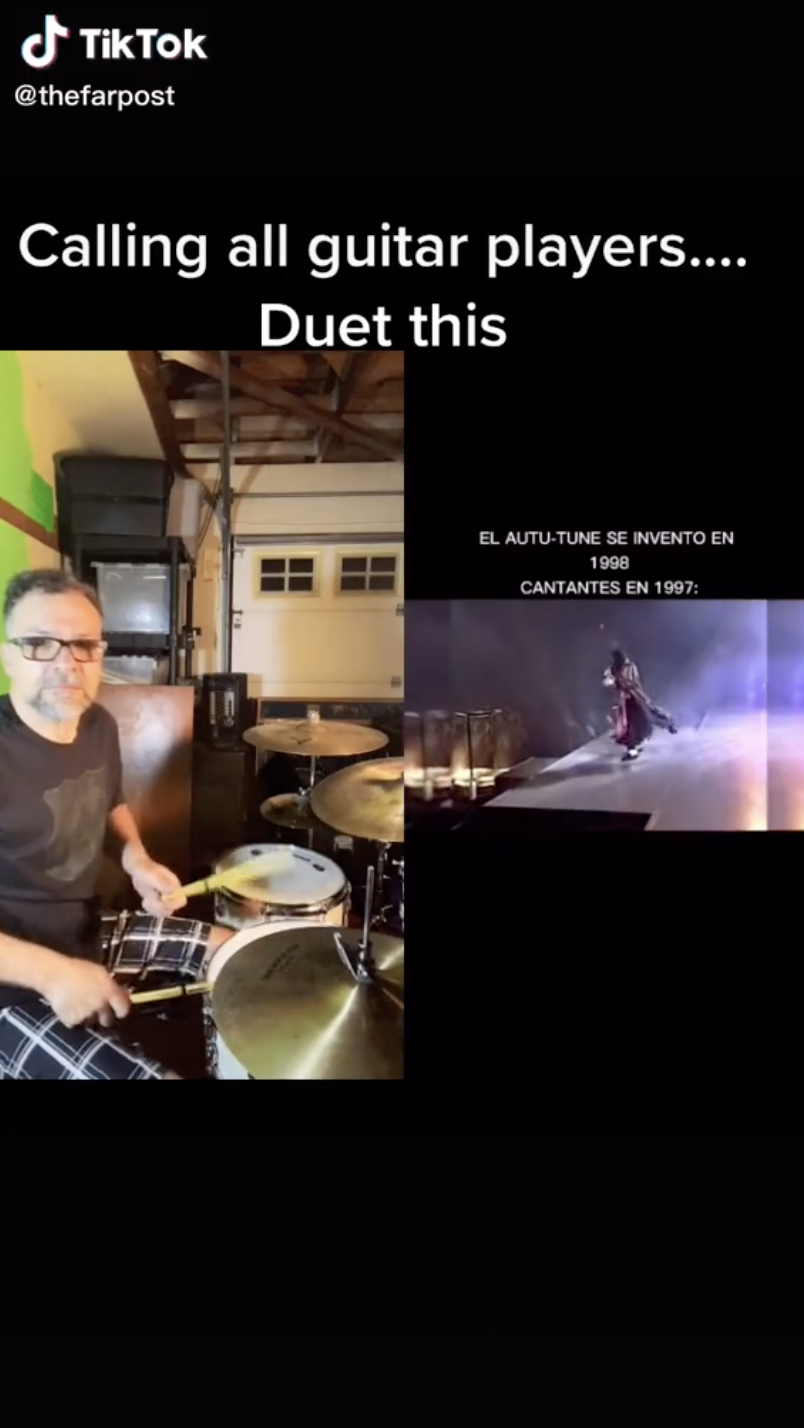 Damien Robitaille is a successful musician from Quebec who has seen his following grow through the TikTok app. Posting one man band videos where Robitaille plays piano, drums, and sings at the same time, has grown his account to over 80,000 followers with over 700,000 likes on his videos. His covers of songs like Mr. Blue Sky by Electric Light Orchestra and Come As You Are by Nirvana are some of his most viewed on the app, with about 103,000 and 209,600 views respectively. (@Damien.robitaille)

TIP: Have fun with it! TikTok doesn’t always need to be serious and hyper curated. Show the viewers YOU! 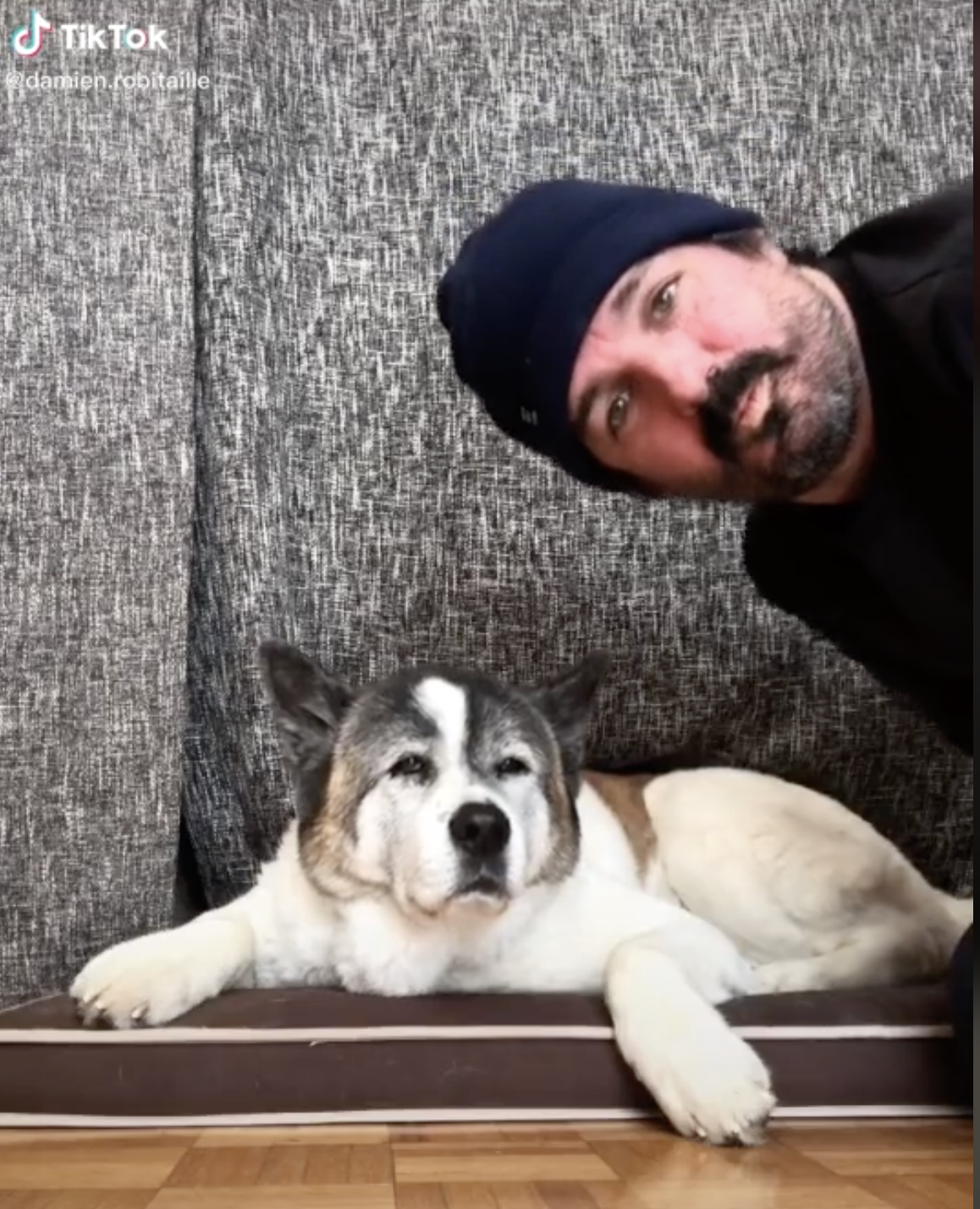 If you’re looking for more TikTok tips, subscribe to our weekly newsletter all about marketing music as an indie musician! 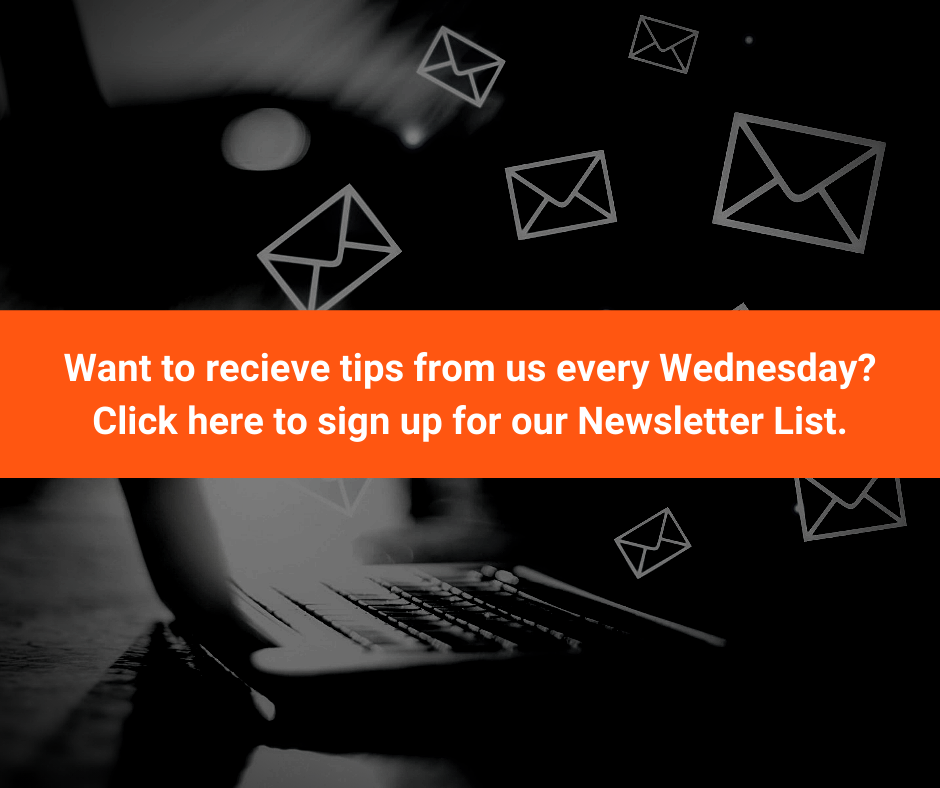