So, You Want To Get On Spotify Playlists? Here’s What You Need To Know First… 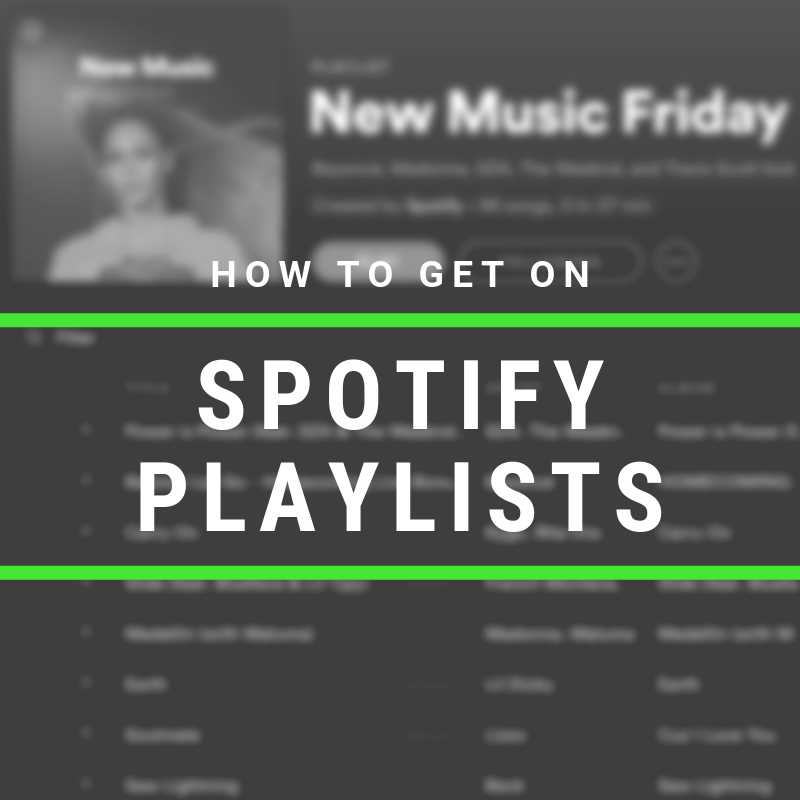 Every publicist can tell you there are certain questions (actually they show up more as orders) we always dread.  When I started 20 years ago it was: “get me in Rolling Stone.” Then, for years it was: “You are going to service my CD to Letterman and Conan, yes?” Today, 100% of the time we are getting asked about Spotify Playlists.

Spotify is at the top of artist’s priorities for a good reason. A 2016 study from Loop on musicbiz.org demonstrates that playlists have surpassed albums in listenership. Another on BuzzFeed says that 1 out of every 5 plays across all streaming services today happens inside of a playlist.

But, hold your horses.  There are a lot of steps to take before you hire a PR firm like mine or a playlist servicing company to get you on playlists.  First, you need to understand quite a few things.

The First Important Thing to Understand is: A Majority of Spotify is Owned by the Major Labels

Their artists dominate most of the most followed playlists.  The reason for this is 3 companies are in control of placing songs on those playlists – so this playing field is NOT even for indies.

Here are the two parts that sum it up well.

“Not all Spotify playlists are created equally… On other playlists, you’ll occasionally notice different logos: the thick cursive word Filtr, the all-caps logo for Topsify, or simple rounded text reading Digster. These are the playlisting brands owned by the major labels: Filtr by Sony, Topsify by Warner, and Digster by Universal.

The fact that these that these major-owned playlists have prominent placement within the platform, should come as no big surprise: Spotify is largely a collaboration with all three major labels. But for me personally, as I itched to learn more about industry insider backdoors to Spotify playlists, learning about Filtr, Digster, and Topsify was illuminating; the beginning of my journey attempting to unpack this mystified world.”

“Outside of the Spotify staff-curated playlists, those curated by Filtr, Digster and Topsify have more visibility on the Browse pages than any other playlisting brands, individuals or labels. With these playlists, employees of Filtr, Digster and Topsify can simply log in and add tracks… the majors effectively use these playlists to pump their artists into Spotify-owned algorithmic playlists.” 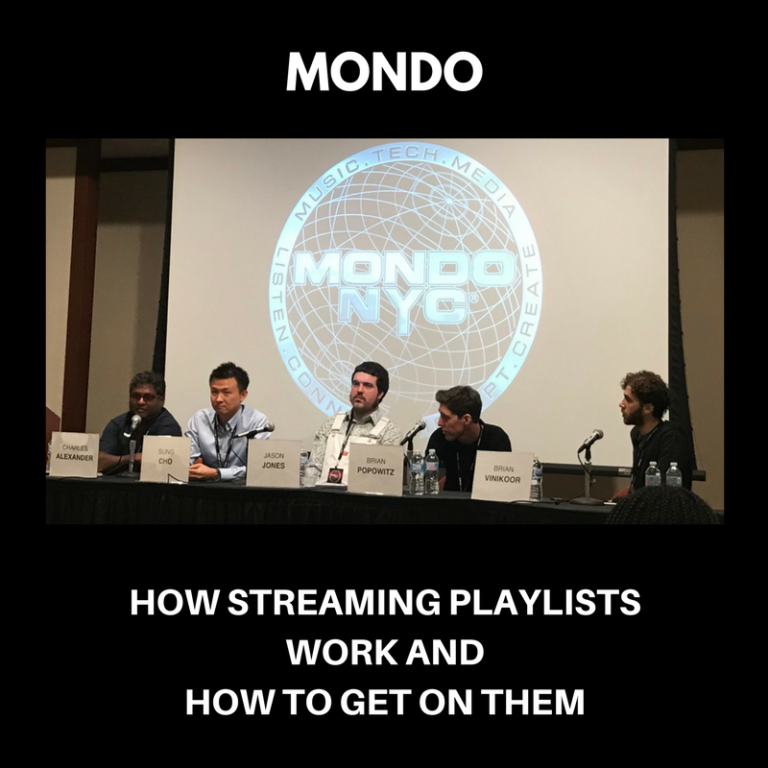 Now that I got the bad news out of the way, there is hope. With some planning and work, you can and will get traction inside this valuable platform. To learn how, I attended the panel How Streaming Playlists Work and How to Get On Them that took place at MONDO 2017 in New York.

The panel consisted of: Co-Founder of Streaming Promotions, Charles Alexander Sung Cho, Founder and CEO of Chartmetric, Brian Vinikoor, Sr. Director Strategic and Digital Partnerships at mtheory, Brian Popowitz, and Director of Sales Mute Records, Jason Jones. I have broken down their conversation into little “nuggets” and added some links to help you along the way.

The major takeaway was: Spotify, just like Facebook has algorithms and rewards artists who spend time on their platform and if you want to get included on any type of playlist, start getting to know how to use it at a pro level before you try to get on Spotify Playlists.

All Artists Need a 360 Plan

You can’t only focus on Spotify and Spotify Playlists. If you don’t have a plan in place for building your audience and meaningfully engaging with them you won’t succeed on Spotify. You also need to understand how to leverage and drive your audience from other platforms to Spotify. This means you need an overall marketing plan with multiple elements taken into account – Social Media, Brand, Tone, PR, Fanbase building, live shows, releases, etc.

Figure Out Your Narrative

And your NARRATIVE is very important.  This means you have to have a signature story and a recognizable brand, tone, and content strategy that feeds into the narrative on social media. Keep your narrative and branding consistent across all media.

Charles warned that after he informs artists of these key factors, he often sees that they skip the steps and pay to get on playlists, “You may get 20K or 30K streams but then it falls off the edge of a cliff because you are unable to take advantage of the momentum that you created.”

And why? Because you skipped all the steps needed. You, therefore, need a comprehensive approach.

Your Social Media Build Must Be Organic

Your social interaction is key and social #s are very important.  Focus on engaging and connecting with real fans and building your audience authentically. Fake numbers from click farms will work against you when your engagement ratio on socials is extremely low compared to your follower numbers. You must build and engaging an audience prior to releasing music.

Many Spotify playlists are curated by key music bloggers. In order to get considered for these playlists, you need to be featured by these music blogs. Start at Hype Machine and understand that PR is an integral part of your Spotify strategy. Or read my 3-part series which will walk you through how to effectively handle your own music PR.

It’s a weird tipping point on what Spotify actually values. Influence is important, that means how many people follow you and your playlists on Spotify and consistent streams are also important. But the number of saves a song or album gets is just as or more important than stream counts and follows. The platform values engagement and interaction with the music or artist over casual consumption.

It’s Not All About Getting on Major Playlists

Everyone has their sights set on the biggest playlists curated by Spotify but not so fast! Brian Popowitz shared “The data has informed Spotify.  We have an artist that is performing well and not on any major playlist. The song is peaking and we are not actively promoting it at all. It gets into people’s weekly suggestions and they stream it and it grows on its own organically in the Spotify ecosystem. This is the “new” music economy. Spotify built an algorithm that is derived from the footprint of an artist.”

Spotify is a Long Game

Jason Jones added that this is a long game: “Do not be afraid of slow but consistent growth” don’t be impatient. Sometimes you can start off on a branded playlist ‘The Sound of’ and you have to show growth of performance w/in those and this may take 4-5 months.”Look at your historical data and see what causes spikes. 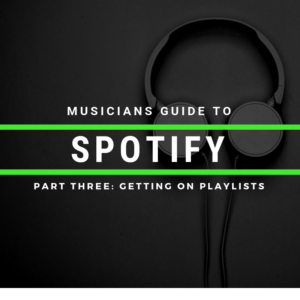 Build Your Own Playlisting Initiatives

Start sharing Spotify playlists in which your music is included. You need to build up plays and then, this impacts the current song that you are working on and any forthcoming singles coming down your pipeline. Create playlists of your own music AND things you love and include yourself and share. You need to create: reach, influence, and non-skip streaming.

Brian added “Owning your audience is everything.” Ask yourself: What is your unique POV? The “my favorite songs right now” gets played and people get tired. Try curating specific vibe or a journey of how you put together playlists – one of our artists made a mix show taking listeners on the journey of how he created an album. Just putting 20 songs on a playlist won’t cut it.

Getting Discovered on Spotify is Quite Hard

Sung added that being on the smaller playlists is not the answer to garnering thousands of plays overnight “discovery is quite hard” in Spotify as they create and promote their own playlists within the platform.

We work with an artist Rob Drabkin, who had a large mailing list and he asked everyone to follow him within Spotify with one email – it worked overnight. Rob connects with an audience in a special way – its not just about his music which is great but he is also amazing at leveraging his tribe. You need an ARMY – every time you ask them to do anything they will!  But you need to have great and consistent communication. – Charles Alexander

Success On Spotify Starts With You

“If you don’t have fans, listens and consumption on Spotify (that you have to create) you are dead in the water.” – Brian Vinikoor.  This means you need to understand the Spotify Basics first!

Know Which Streaming Platform is Best for Your Genre of Music

“Each platform has a unique vibe.  If you are a Country or Christian artist I would look to Amazon, if you are playing rock look towards iTunes, if you are indie or hip-hop, focus on Spotify.” – Jason Jones

Never Forget The Newsletter (Yep, The Least Sexy Marketing Tool Out There!)

“It goes back to owning your own audience – it all goes back to how many times people listen to your music.” – Brian Popowitz

If you don’t have an effective newsletter strategy it’s high time you change that.

Everyone Wants To Be on New Music Friday

EVERYONE wants to be on Spotify’s New Music Friday playlist but “the chance of me getting you on that is next to none” the independent slots are few and far between and getting smaller.”

Charles went on to say: “Let’s start with Fresh Finds or something that is appropriate for where you are in your career. This will give you a chance to grow and build your narrative on Spotify. This will let you take full advantage of the momentum and opportunities you create on the platform.”

Steaming is a means to people hearing your songs but it’s what happens AFTER that in the real world? What should be happening before, during and AFTER you get on the playlist? What if you get on New Music Friday and you don’t know what to do next!