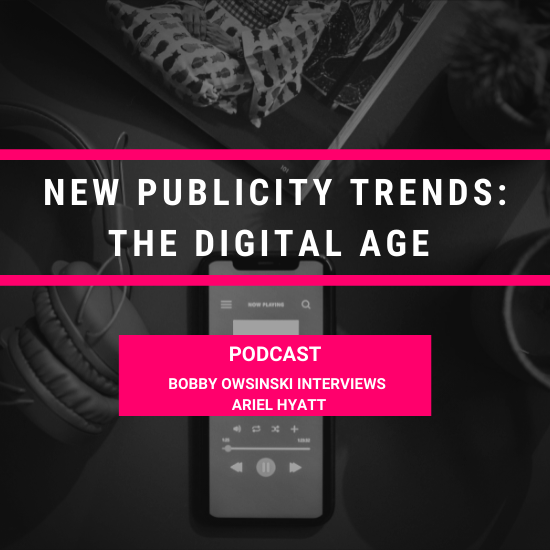 Ariel Hyatt speaks on new publicity trends with Bobby Owsinski on his podcast Inner Circle. Ariel covers important takeaways from her latest book The Ultimate Guide To Music Publicity. Cyber PR celebrates over 25 years in the business with this book and Ariel shares with the world ways to promote yourself or find a good publicist.

The Importance of Music Blogs in Current Publicity Trends

In the 90s, newspapers were a common outlet for publicity. There was a database with over 12,000 newspapers in the U.S. alone. Since then, we have dwindled down to less than 3,000. This is a blow for any artist wanting to get coverage in traditional media. Blogs, podcasts, and playlisters are where you need to start. If you have less than 10,000 followers, not signed to a major, and don’t have a national tour, this is where you need to go.

Once You Tried Publicity, it Might Not Be Where You Want to Spend Your Waking Hours

Artists tend to not match with the right publicist often and they are bummed when they hire the wrong match for them and are disappointed. With publicity, you pay for effort not results. Many artists come in with a specific result they desire. Some want to be in Billboard News or other giant publications. Unfortunately, there’s limited space and if you’re a small artist, you’re unlikely to have a feature.

You have to know how to ask for what you’re looking for and whether or not that firm specializes in it. Naturally, a publicist is going to be very good at selling you. You might get something good from that, but you might not get what you’re expecting. If you want to stand out, you have to be good at what you’re communicating.

Many artists struggle with finding their story or brand. They need help figuring out what finds them interesting besides music.If you can identify which part of you goes with what, often called the hook, you find that golden nugget. You give the media and your fans something to connect to. Along with finding your story, you may have to build a press kit. Most publicity firms are digital, but there are still some that require submission of a physical press kit.

As years went by, the entire publicity business had to become more nimble. We had to inform our clients that delivering 14 tracks to a publicist and expecting them to take the time to listen to all of it is too high of a goal, especially for artists that aren’t established. Most publishers and playlisters will write about one single. Asking them to write about an entire album is like asking them to drink fire from a hose.

Many artists come to us with music to promote, but we notice there’s an issue with their general brand. We see there’s a big mess on their social channels and the brand is all mixed up. Before releasing any music, we have to fix that brand. Often, artists come to us with full albums and we say” ok, here’s our recommendation: we should have 3-4 singles leading up to the album. If you want to release your album in May, we will suggest releasing in September instead and release a single each month until then. Younger generations are better at promoting singles and are natives in the digital world. They are more likely to want to release singles and turn it into an EP. For older clients, we have to do a bit of reverse engineering and unpacking the album.

A lot of our younger clients are suffering tremendously with social media anxiety. We’ve had multiple clients come to us all excited with a plan, but halfway through they have to opt out of social media entirely. This is because of anxiety and depression that arises from stresses of remaining relevant on social media.

In some cases, we ask our clients to share less and for mostly our older clients, we beg them to share more. It doesn’t have to be deeply personal, but if you give something that’s just vanilla bland, you won’t get any feedback. There’s an enormous difference between promoting yourself and using it to connect with fans. You must also be aware of bearing your soul and letting it get the best of you. The lesson is: you’re not for everyone.

There is so much more to learn about modern publicity. If you are interested in publicity, be sure to order Ariel’s book The Ultimate Guide to Music Publicity.