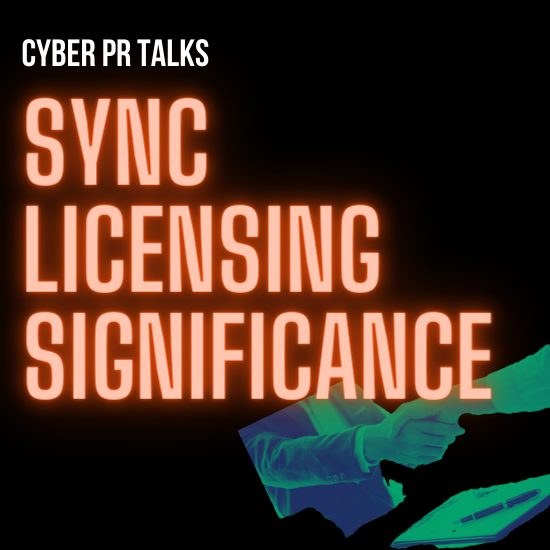 Cyber PR delves into what sync licensing is and why it is essential. As an artist, profiting only from CD sales, live shows, and downloads is no longer as profitable as it once was. Instead, most artists will benefit from their music being played at other places or in film and television because companies that wish to use your music must purchase what is called a license.

If you’re past this step and want to move forward to other things you can do before releasing music, click here.

Before we delve into the different types of licensing, we need to understand what a license is. Essentially, a license is something that allows other people or companies to rent your music and pay a fee for renting it. There are licenses for every possible outlet artists can loan out their music to, and every license has its name and price. If artists were to license out their music to all the different outlets, they would make much more money than just sticking to the music cycle of record, release, tour, and repeat. Before licensing your music, be sure to register your work to a PRO such as ASCAP, BMI, or SESAC. Registering your work will also allow you to submit a claim against copyright infringement if it were ever to occur. Without having your work registered, you cannot make a case for copyright infringement.

More on copyright and registering your work here.

A sync license is needed anytime a song is used in a film or tv show. The sync license is tied to the songwriter and not the performer. If you are both, then good for you! However, if you only perform the song, you don’t get any royalties from this. The sync license is only for the songwriter to get paid for their composition. The producer of the film or tv show wishing to use your song is the one that must reach out to you (the songwriter) or your publisher if you have one. This license gives the producer the right to sync the song’s composition with the moving pictures in a movie, tv-show, or ad.

A master usage license is also needed for a producer to use the song. This license is tied to the performer and not the songwriter. Typically, the producer will reach out to the performer who sang the version of the song they will use. However, most artists are not the master holder of their songs because labels demand to own the songs they record under the obligation of a contract with the artist. Therefore, the person who will be getting paid for this license is the label.

With these kinds of licenses, a compulsory license doesn’t exist. This means that either the producer or the label (or the artist themselves if they don’t have a publisher nor signed to a label) can deny the producer’s request to use the song. The producer’s job is to negotiate with both sides for a price to settle on and typically reach out to the publishers to corner the label into agreeing.

Still a little lost? Click here for an article that breaks down sync licensing even further.

Once a deal is struck, the divide typically goes 50/50/50. The producer sends 1/3 of the paycheck to the publishers for the sync license. They send the other 1/3 of the paycheck to the label for the master license. The producer finally gets to keep the final 1/3 of the revenue. There may be times when the publisher agrees on a deal, but the label does not. In these cases, producers of the film will typically use their actors to sing a song cover they want to license as a loophole. However, if the publisher denies the producer’s right to use the song, there is no way around it; the producer will choose a different song. If the film or tv show is being publicly performed on tv (broadcasted), a performance royalty is issued to the writer and publisher, but not the performer. However, if the webcasters broadcast the work over the internet rather than terrestrial, the webcasters are obligated to pay the performers and content owners, and publishers.

Sync licenses have extended to profit off video games. Guitar Hero and Grand Theft Auto have created a market for this license within the gaming industry. However, we are still unsure of just how profitable this industry is for the music business. Getting your music involved in tv and film can be very beneficial for both the artist and the producer of the film as it creates revenue and exposure for both parties. It is highly recommended that, as an artist, you research music supervisors and submit some of your work to someone who could get you in motion pictures.