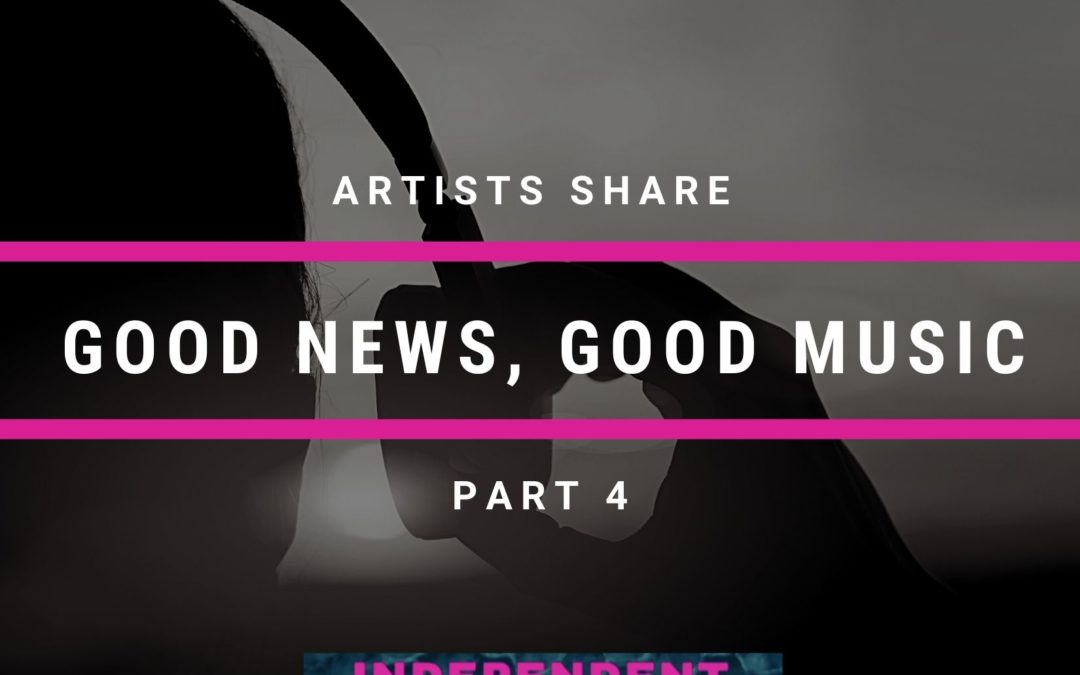 We are so delighted we get to end this year on a HIGH NOTE thanks to all of the musicians who have contributed their GOOD NEWS via Independent Artist Buzz. We wish you a safe and happy new year and please keep your music and your good news flowing!

Please Follow the Good News, Good Music Spotify Playlist below to hear all of these amazing tracks. 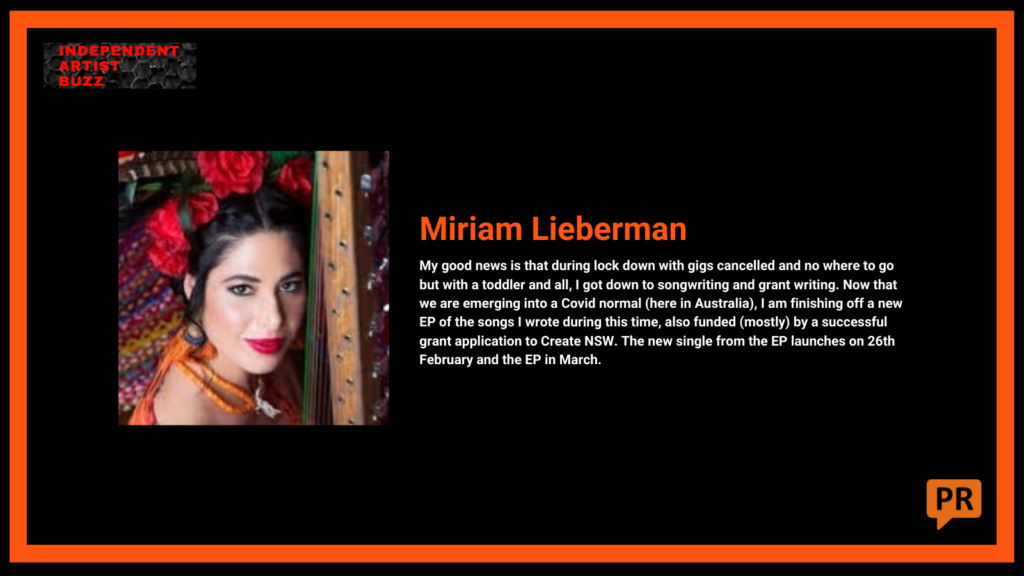 Received A Grant To Record Her New EP

My good news is that during lock down with gigs cancelled and no where to go but with a toddler and all, I got down to songwriting and grant writing. Now that we are emerging into a Covid normal (here in Australia), I am finishing off a new EP of the songs I wrote during this time, also funded (mostly) by a successful grant application to Create NSW. The new single from the EP launches on 26th February and the EP in March. 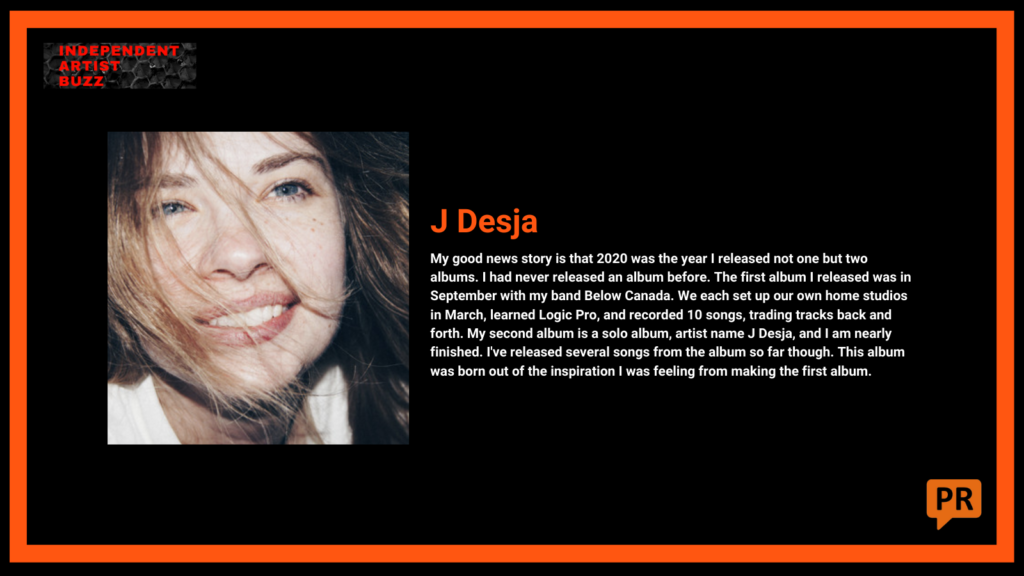 Released Two Albums In One Year

My good news story is that 2020 was the year I released not one but two albums. I had never released an album before. The first album I released was in September with my band Below Canada. We each set up our own home studios in March, learned Logic Pro, and recorded 10 songs, trading tracks back and forth. My second album is a solo album, artist name J Desja, and I am nearly finished. I’ve released several songs from the album so far though. This album was born out of the inspiration I was feeling from making the first album.

My last bit of good news is that I have finally decided that music is no longer a hobby for me; it is now my career, my joy and my passion. I can only hope that my music resonates with others and connects me to them. 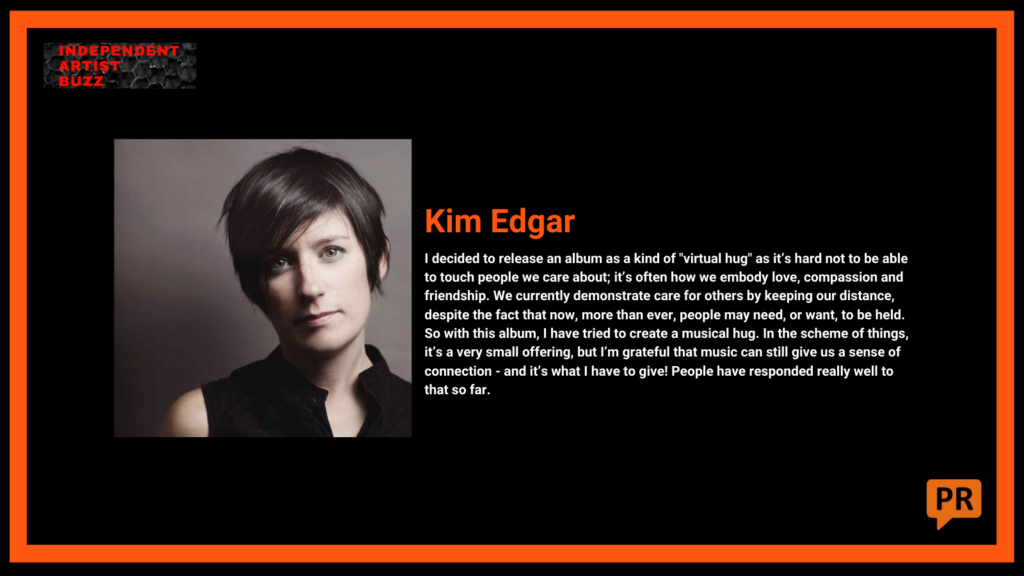 Sharing The Love Via Virtual Hugs

I decided to release an album as a kind of “virtual hug” as it’s hard not to be able to touch people we care about; it’s often how we embody love, compassion and friendship. We currently demonstrate care for others by keeping our distance, despite the fact that now, more than ever, people may need, or want, to be held. So with this album, I have tried to create a musical hug. In the scheme of things, it’s a very small offering, but I’m grateful that music can still give us a sense of connection – and it’s what I have to give! People have responded really well to that so far. 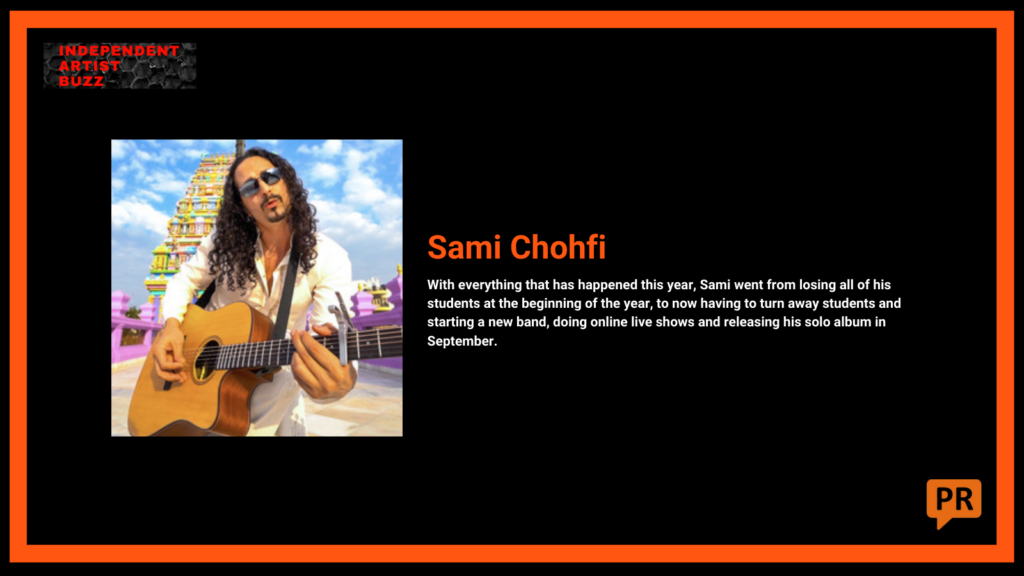 From Teacher To Band Member

With everything that has happened this year, Sami went from losing all of his students at the beginning of the year, to now having to turn away students and starting a new band, doing online live shows and releasing his solo album in September. 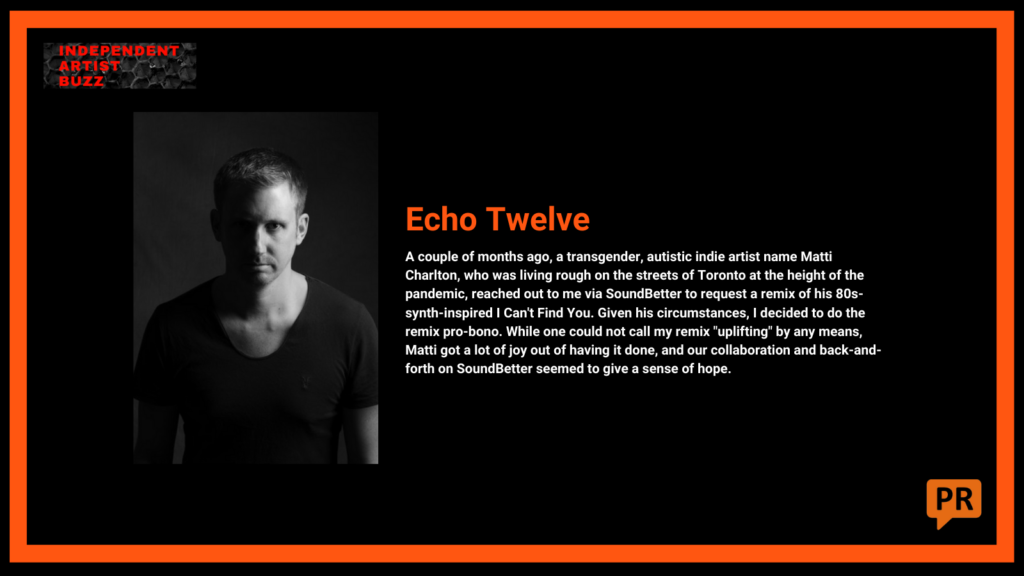 A couple of months ago, a transgender, autistic indie artist name Matti Charlton, who was living rough on the streets of Toronto at the height of the pandemic, reached out to me via SoundBetter to request a remix of his 80s-synth-inspired I Can’t Find You. Given his circumstances, I decided to do the remix pro-bono. While one could not call my remix “uplifting” by any means, Matti got a lot of joy out of having it done, and our collaboration and back-and-forth on SoundBetter seemed to give a sense of hope. 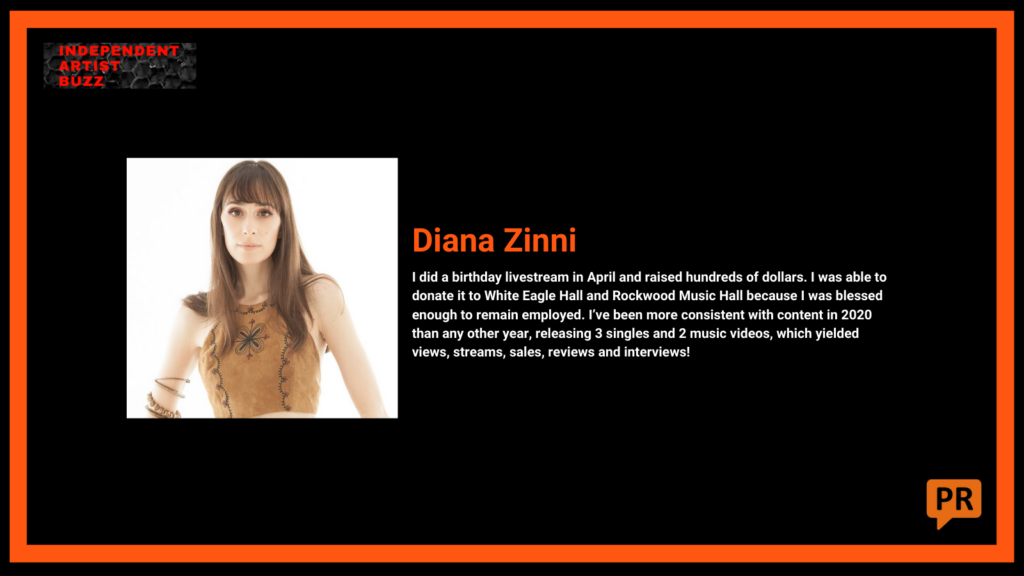 Diana Zinni | “Point of No Return”

I did a birthday livestream in April and raised hundreds of dollars. I was able to donate it to White Eagle Hall and Rockwood Music Hall because I was blessed enough to remain employed. I’ve been more consistent with content in 2020 than any other year, releasing 3 singles and 2 music videos, which yielded views, streams, sales, reviews and interviews! 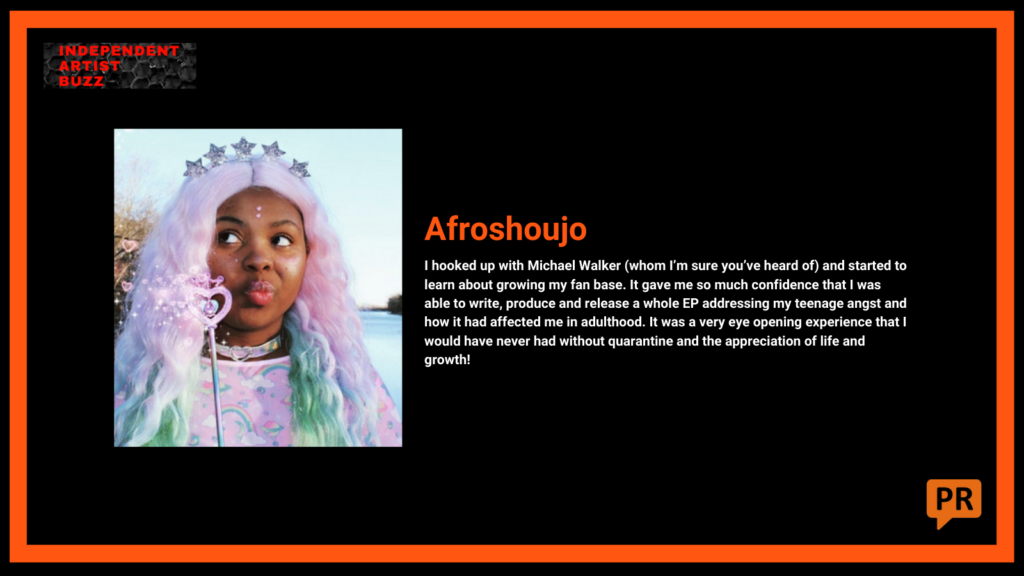 When the pandemic hit I was working on my first album but I had to change my whole course of action both professionally and emotionally!

I hooked up with Michael Walker (whom I’m sure you’ve heard of) and started to learn about growing my fan base. It gave me so much confidence that I was able to write, produce and release a whole EP addressing my teenage angst and how it had affected me in adulthood. It was a very eye opening experience that I would have never had without quarantine and the appreciation of life and growth! 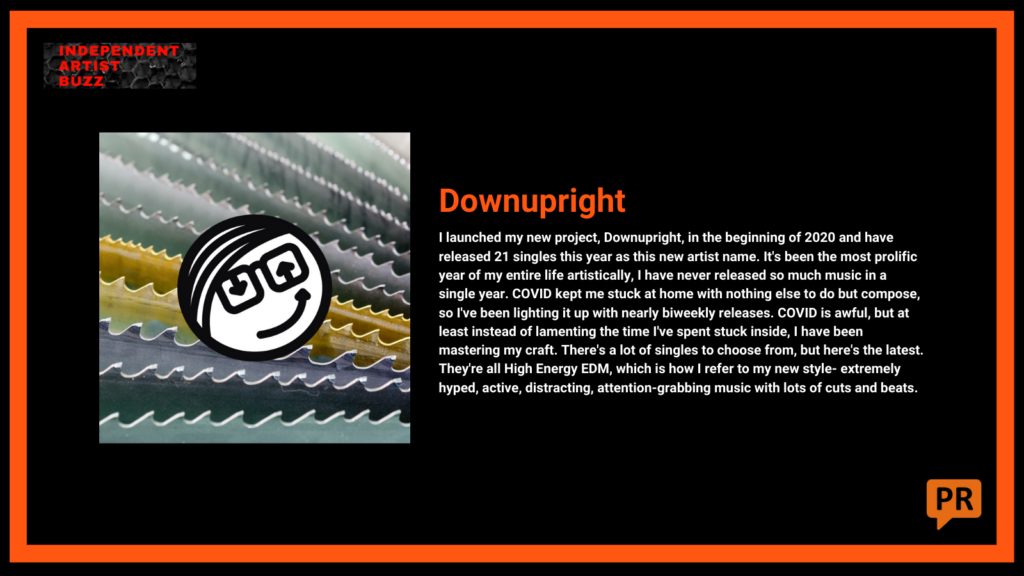 I launched my new project, Downupright, in the beginning of 2020 and have released 21 singles this year as this new artist name. It’s been the most prolific year of my entire life artistically, I have never released so much music in a single year. COVID kept me stuck at home with nothing else to do but compose, so I’ve been lighting it up with nearly biweekly releases. COVID is awful, but at least instead of lamenting the time I’ve spent stuck inside, I have been mastering my craft. There’s a lot of singles to choose from, but here’s the latest. They’re all High Energy EDM, which is how I refer to my new style- extremely hyped, active, distracting, attention-grabbing music with lots of cuts and beats. 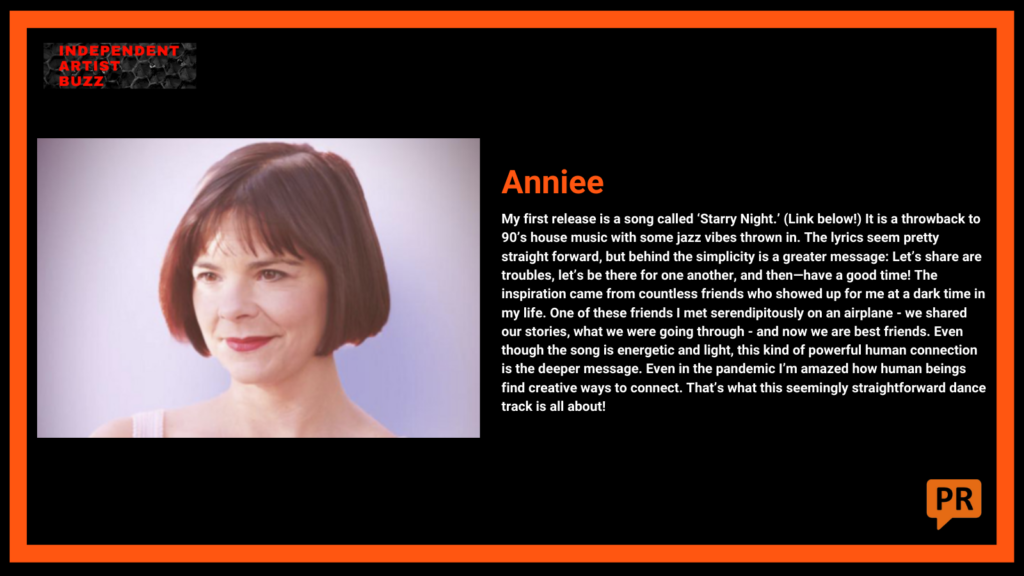 My first release is a song called ‘Starry Night.’ (Link below!) It is a throwback to 90’s house music with some jazz vibes thrown in. The lyrics seem pretty straight forward, but behind the simplicity is a greater message: Let’s share are troubles, let’s be there for one another, and then—have a good time!

The inspiration came from countless friends who showed up for me at a dark time in my life. One of these friends I met serendipitously on an airplane – we shared our stories, what we were going through – and now we are best friends. Even though the song is energetic and light, this kind of powerful human connection is the deeper message. Even in the pandemic I’m amazed how human beings find creative ways to connect. That’s what this seemingly straightforward dance track is all about! 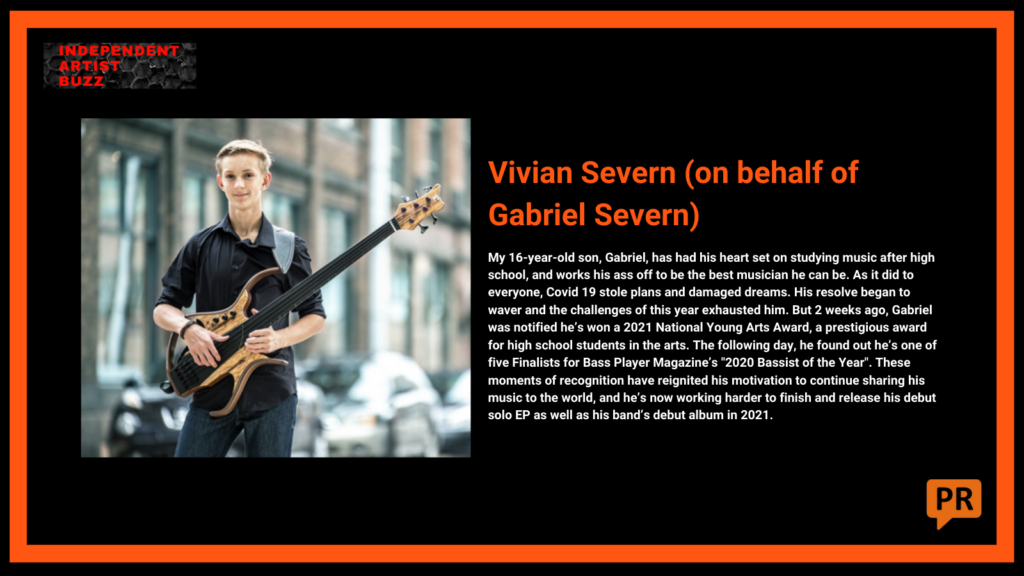 My 16-year-old son, Gabriel, has had his heart set on studying music after high school, and works his ass off to be the best musician he can be. As it did to everyone, Covid 19 stole plans and damaged dreams. His resolve began to waver and the challenges of this year exhausted him. But 2 weeks ago, Gabriel was notified he’s won a 2021 National Young Arts Award, a prestigious award for high school students in the arts. The following day, he found out he’s one of five Finalists for Bass Player Magazine’s “2020 Bassist of the Year”. These moments of recognition have reignited his motivation to continue sharing his music to the world, and he’s now working harder to finish and release his debut solo EP as well as his band’s debut album in 2021. 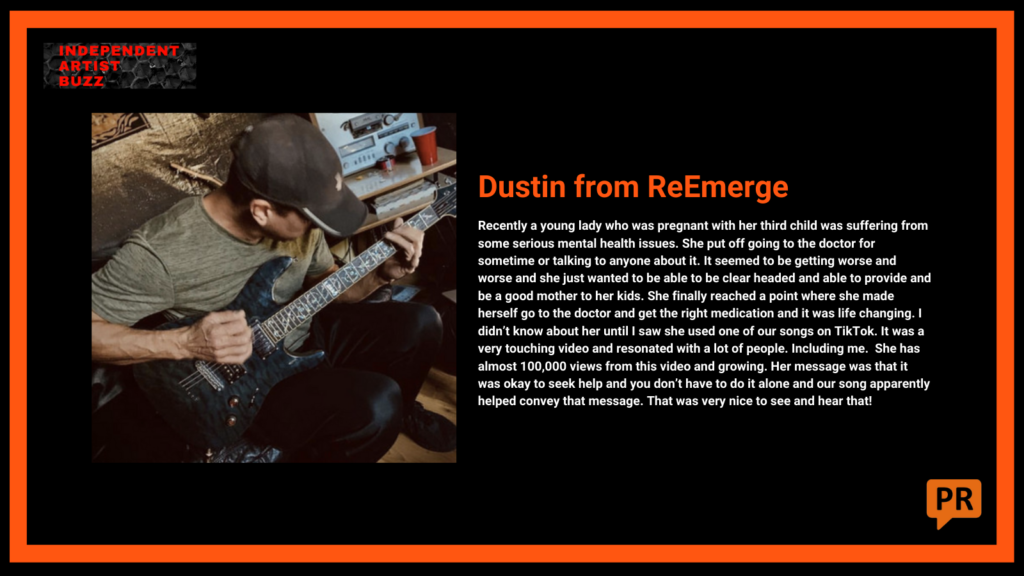 Dustin from ReEmerge | “Can’t Feel You”

Inspired A Fan To Ask For Help When They Need It

Recently a young lady who was pregnant with her third child was suffering from some serious mental health issues. She put off going to the doctor for sometime or talking to anyone about it. It seemed to be getting worse and worse and she just wanted to be able to be clear headed and able to provide and be a good mother to her kids. She finally reached a point where she made herself go to the doctor and get the right medication and it was life changing. I didn’t know about her until I saw she used one of our songs on TikTok. It was a very touching video and resonated with a lot of people. Including me.  She has almost 100,000 views from this video and growing. Her message was that it was okay to seek help and you don’t have to do it alone and our song apparently helped convey that message. That was very nice to see and hear that! Thank you for your time and the opportunity! 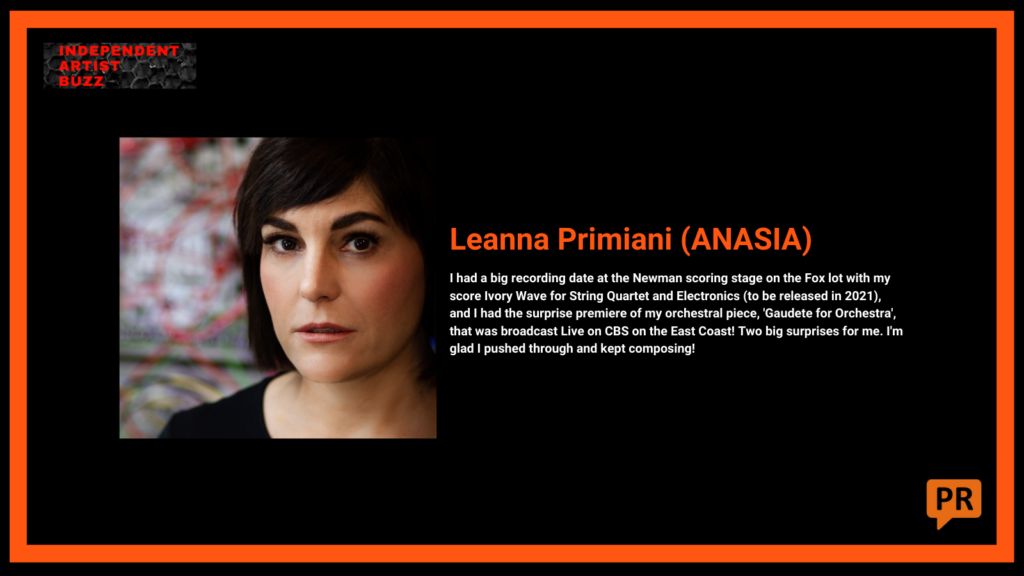 I had a big recording date at the Newman scoring stage on the Fox lot with my score Ivory Wave for String Quartet and Electronics (to be released in 2021) https://muse.ai/vd/BBYymyt, and I had the surprise premiere of my orchestral piece, ‘Gaudete for Orchestra’, that was broadcast Live on CBS on the East Coast! Two big surprises for me. I’m glad I pushed through and kept composing!