Guest Post by Rorie Kelly: Why 2015 is the Year of Community Not Competition 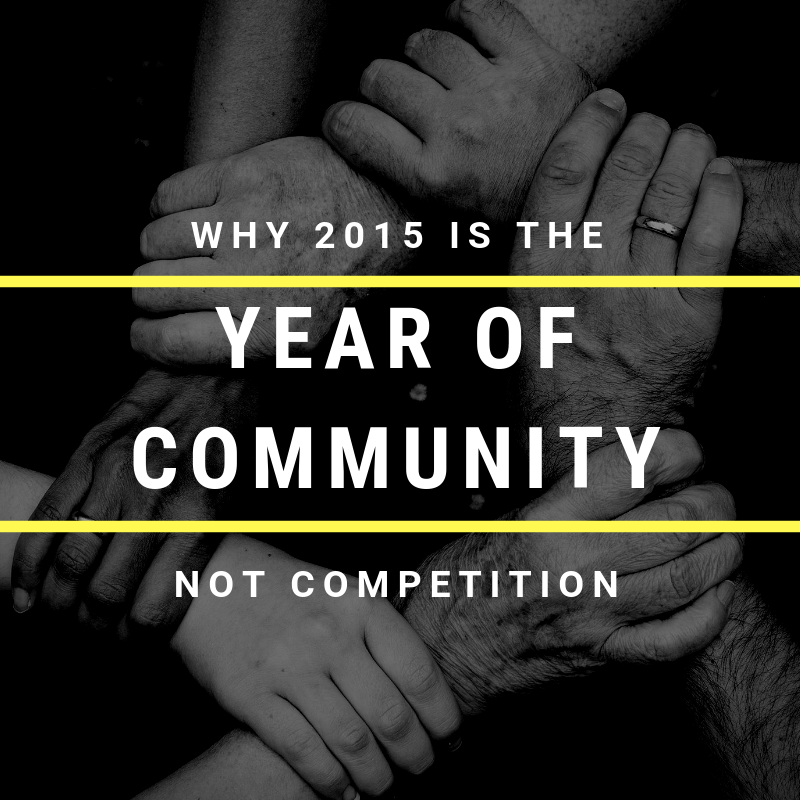 I hit a milestone in 2014–I doubled my income from music.

Like many indie artists, building up real income with my music has been a long and hazardous journey.  But after years of hard work and trial and error, I’m finally starting to get good at it, and I wanted to share what I’d learned with other indie artists.

I tossed out an email to Women in Music WIM, a networking group I had joined earlier in the year, asking if anyone was interested in running a guest blog.  Within hours, my inbox filled up with congratulations, suggestions, and offers of help–mostly from women I had never met. This is the power of community at work.

After sending just that one email out, I found myself with the luxury of choosing which online publication would run my story, out of several really exciting offers. Turns out Women in Music is one powerful community to be a part of! I wrote the article over the weekend, and it posted on GuitarWorld.com on Monday. Throughout the week, a massive comment thread slowly grew on Guitar World’s Facebook page. Over 50 percent of the responses were the same cynical joke: “LOL, I’d love to double my income, but two times nothing is still nothing!”  It was funny enough (the first ten times) but suddenly all I could see was how hopeless many musicians felt.

Then a thought hit me like a ton of bricks: that used to be me. I used to feel exactly that cynical about music and money. I had a hard time seeing fellow artists have any kind of success, especially if their act was similar to mine. I’d feel hopeless and envious, wondering what they were doing that I wasn’t. I became terrified that I would waste my whole life working hard and achieving nothing.

Reading those comments made me realize I don’t feel that way anymore. I feel optimistic about my future. When I see other artists have success, I get giddy and excited for them. What changed? I’ve been mulling this over all month. I think the answer is community.

At the beginning of 2014, I decided to use my tax refund to join two networking groups I’d been hearing about for years: Women in Music and GoGirls Elite. I had a really big DIY/lone wolf thing going on at that time, and even as I was paypalling the membership fees I was expecting it to come to nothing. But few people I respected had told me “JOIN!” and in a rare act of compliance, I decided to heed their advice.

I could put a series of humblebrags here about the opportunities that came out joining those groups – showcases at music conferences, album reviews, interviews on podcasts. But the really invaluable thing that happened was I found community. Friendships. Peers. I don’t feel like I’m in this alone anymore.  It has changed my whole outlook.

Through GoGirls Music’s weekly Twitter chat (hashtag #ggchat on Thursdays at 3 and 9pm EST) I began meeting other musicians facing the exact same struggles I was facing. Balancing music career work with a day job. Gauging what opportunities to spend money on. Finding a way to take adequate care of ourselves while working all day and gigging all night. Comparing notes made us all stronger. Forming friendships with other artists made me feel thrilled when any of us experienced a new success. Jealousy was out the window. If one of us was finding success, it meant all of us could find it.

Meanwhile, in the Women in Music email group, I saw women at every level of the industry (from CEOs to complete newbies) helping each other out just for the sake of doing it. I saw people asking for and receiving advice, contacts, feedback. When something came up that I could help with, I was eager to share my knowledge, even with a complete stranger. It filled me with joy to help someone else out with something I had struggled to learn the hard way. Instead of the competition and cattyness, I had come to expect from the NYC music scene, the prevailing attitude was “We’re all in this together.”

My big question is: why did it take me 10 years of hard work to find community? What is it about the music industry that fills us with such self-doubt, we feel upset when other artists succeed instead of optimistic? What is so broken about the indie music scene that we literally laugh off the idea of making money? Of all of us finding success instead of a chosen few?

Maybe these are topics for another essay (or an entire book). At the end of the day, the only thing I’m sure of is this: Community is my antidote for cynicism. Social media and networking groups have changed my life in the last year, mainly because I let them. Putting myself out there like the new kid at school, with no expectations and no real plan, has given me the faith in myself that I struggled to find for years.

Community not competition is my motto for the year. I hope you’ll join me.

People hearing Rorie Kelly for the first time often comment, “I can’t believe that voice  came out of that body.”  The singer/songwriter has been compared to Alanis Morissette and Janis Joplin for her catchy, melodic songwriting style and raw vocal power. Music,  videos, and tour dates are available at http://www.roriekelly.com.