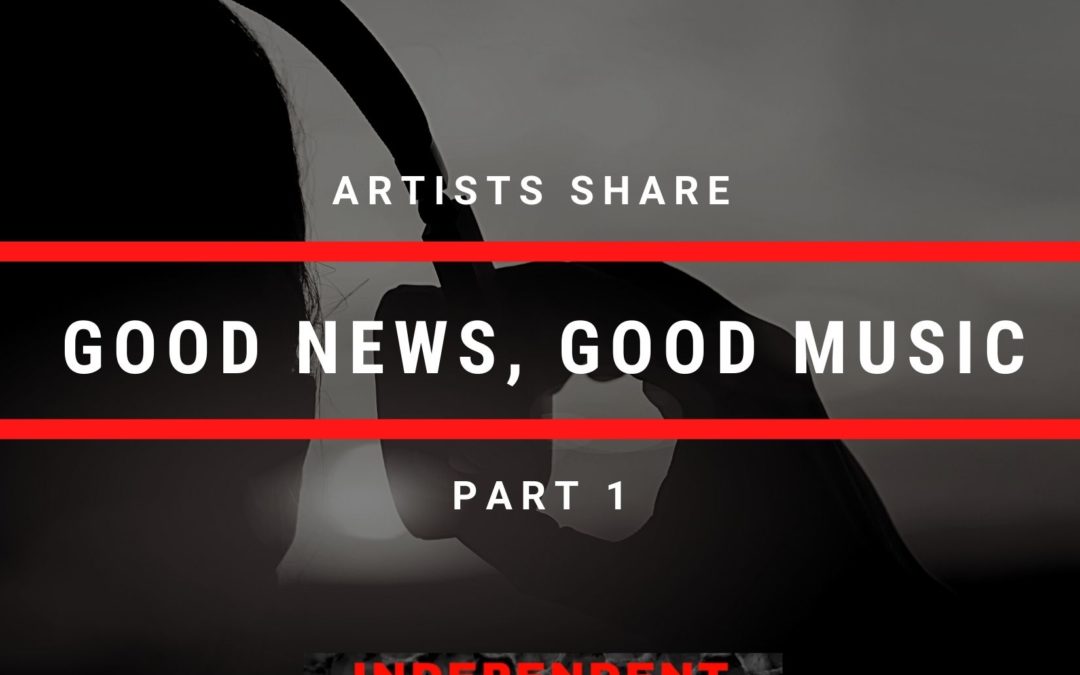 Here we are at the end of 2020. We don’t need to tell you that this has been a very hard year. We are feeling beaten down by the bad news and music is the one thing that lifted our spirits again and again and saw us through. We have partnered with our friends at Independent Artist Buzz to bring you a series of GOOD News from artists who carried on making music in spite of all of the insanity that was happening and continues to grip us.  We have cried listening to some of the tracks, felt deeply inspired and yes we laughed as well.  What we have seen is the Cyber PR artist community is rich and varied – there are artists from all across the USA included as well as Jamaica, Australia, South Africa, France, Sweden, The UK,  Germany and Scotland.

So – we bring you part 1 of our 4 part series GOOD NEWS, GOOD MUSIC. 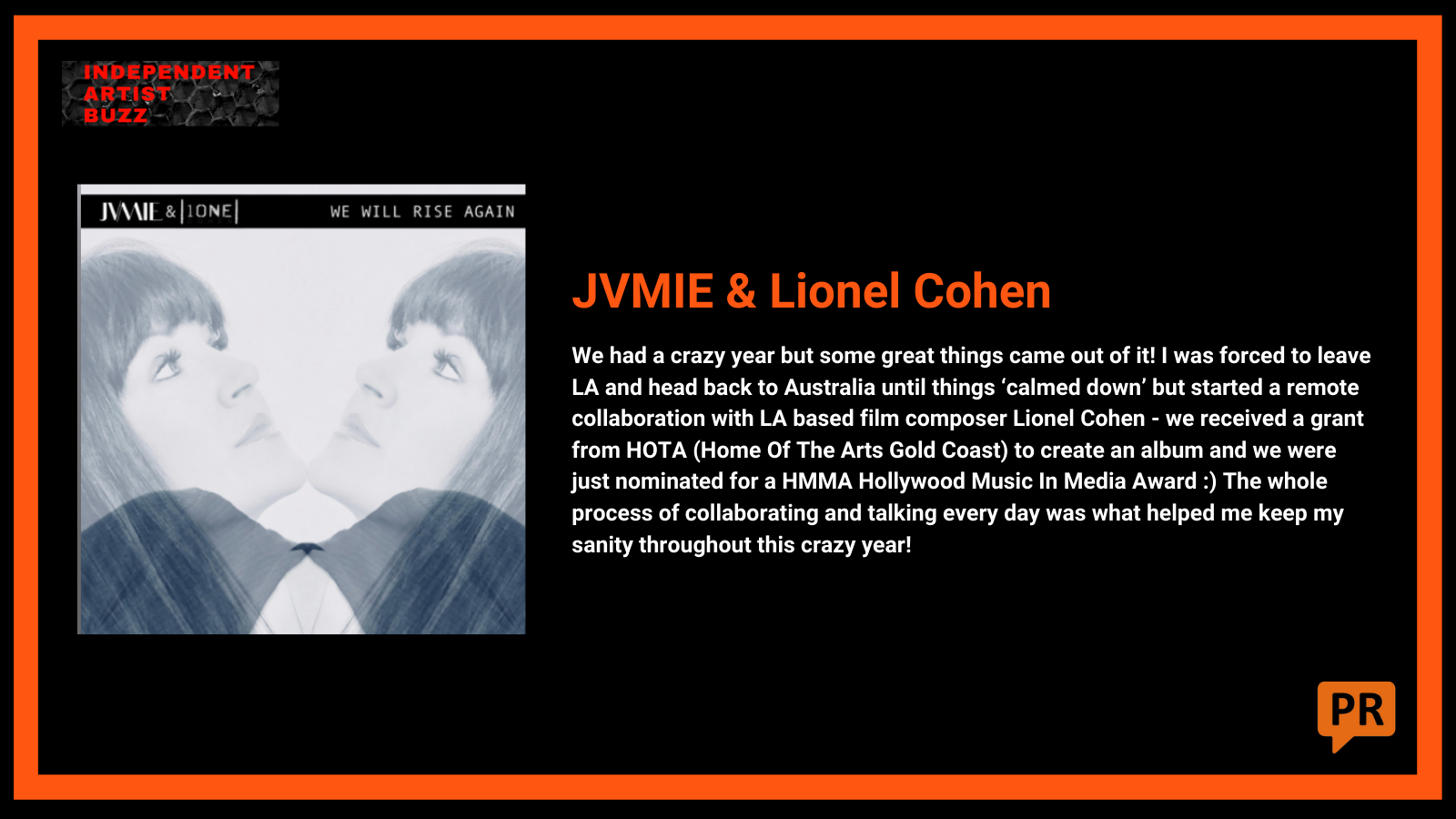 We had a crazy year but some great things came out of it! I was forced to leave LA and head back to Australia until things ‘calmed down’ but started a remote collaboration with LA based film composer Lionel Cohen – we received a grant from HOTA (Home Of The Arts Gold Coast) to create an album and we were just nominated for a HMMA Hollywood Music In Media Award 🙂 The whole process of collaborating and talking every day was what helped me keep my sanity throughout this crazy year! 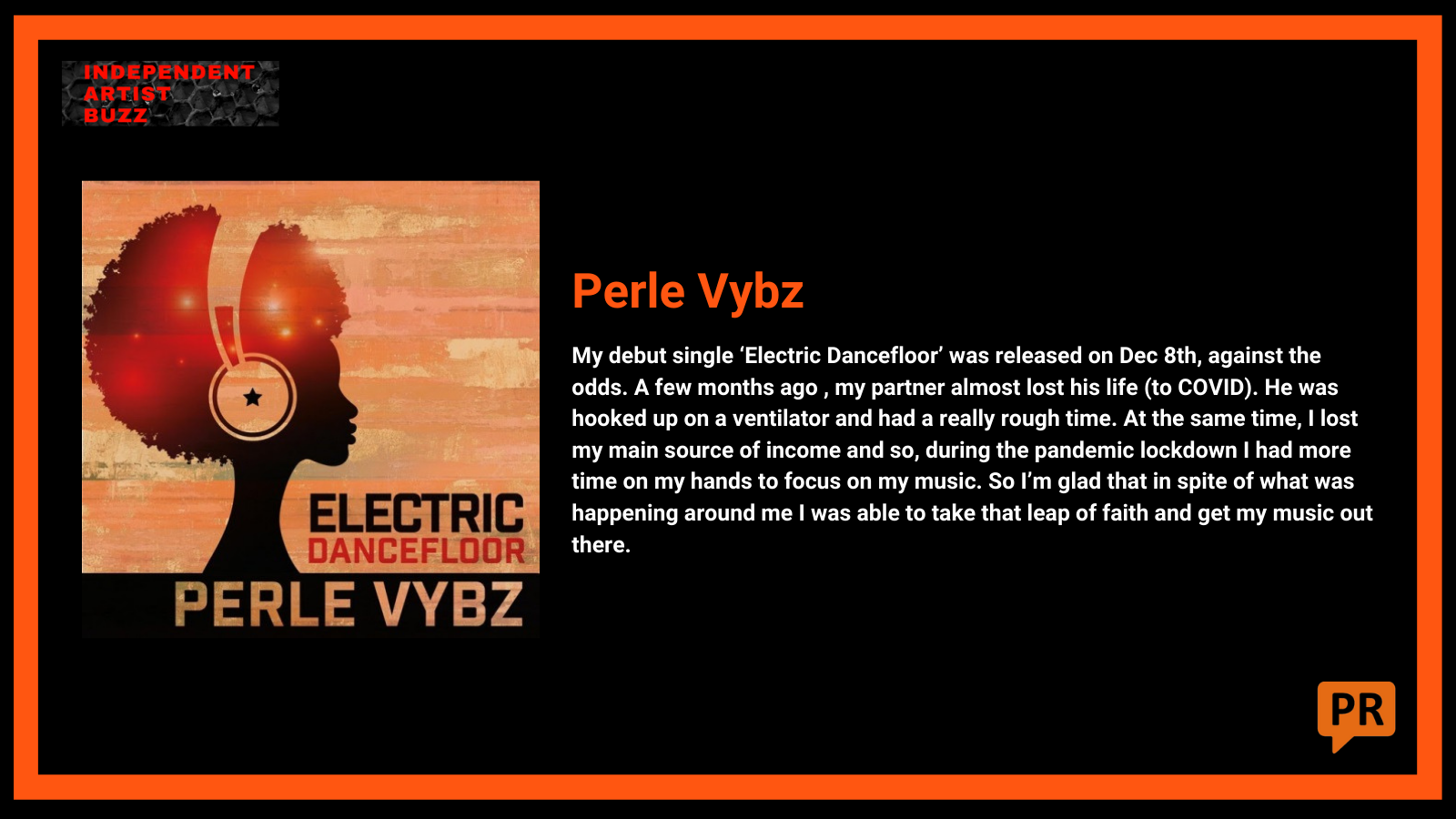 My debut single ‘Electric Dancefloor’ was released on Dec 8th, against the odds. A few months ago , my partner almost lost his life (to COVID). He was hooked up on a ventilator and had a really rough time. At the same time, I lost my main source of income and so, during the pandemic lockdown I had more time on my hands to focus on my music. So I’m glad that in spite of what was happening around me I was able to take that leap of faith and get my music out there. 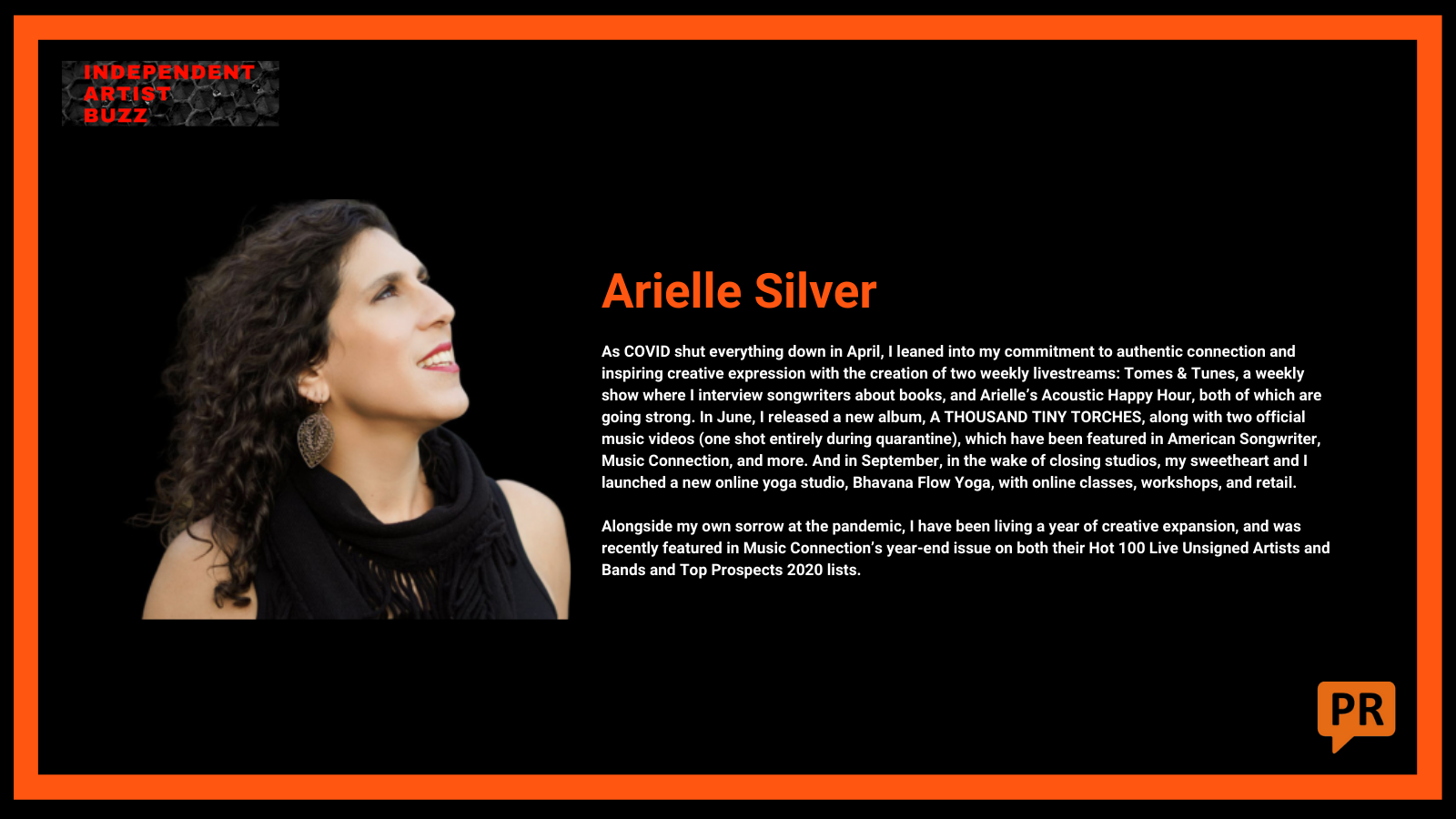 As COVID shut everything down in April, I leaned into my commitment to authentic connection and inspiring creative expression with the creation of two weekly livestreams: Tomes & Tunes, a weekly show where I interview songwriters about books, and Arielle’s Acoustic Happy Hour, both of which are going strong. In June, I released a new album, A THOUSAND TINY TORCHES, along with two official music videos (one shot entirely during quarantine), which have been featured in American Songwriter, Music Connection, and more.And in September, in the wake of closing studios, my sweetheart and I launched a new online yoga studio, Bhavana Flow Yoga, with online classes, workshops, and retail.

Alongside my own sorrow at the pandemic, I have been living a year of creative expansion, and was recently featured in Music Connection’s year-end issue on both their Hot 100 Live Unsigned Artists and Bands and Top Prospects 2020 lists. 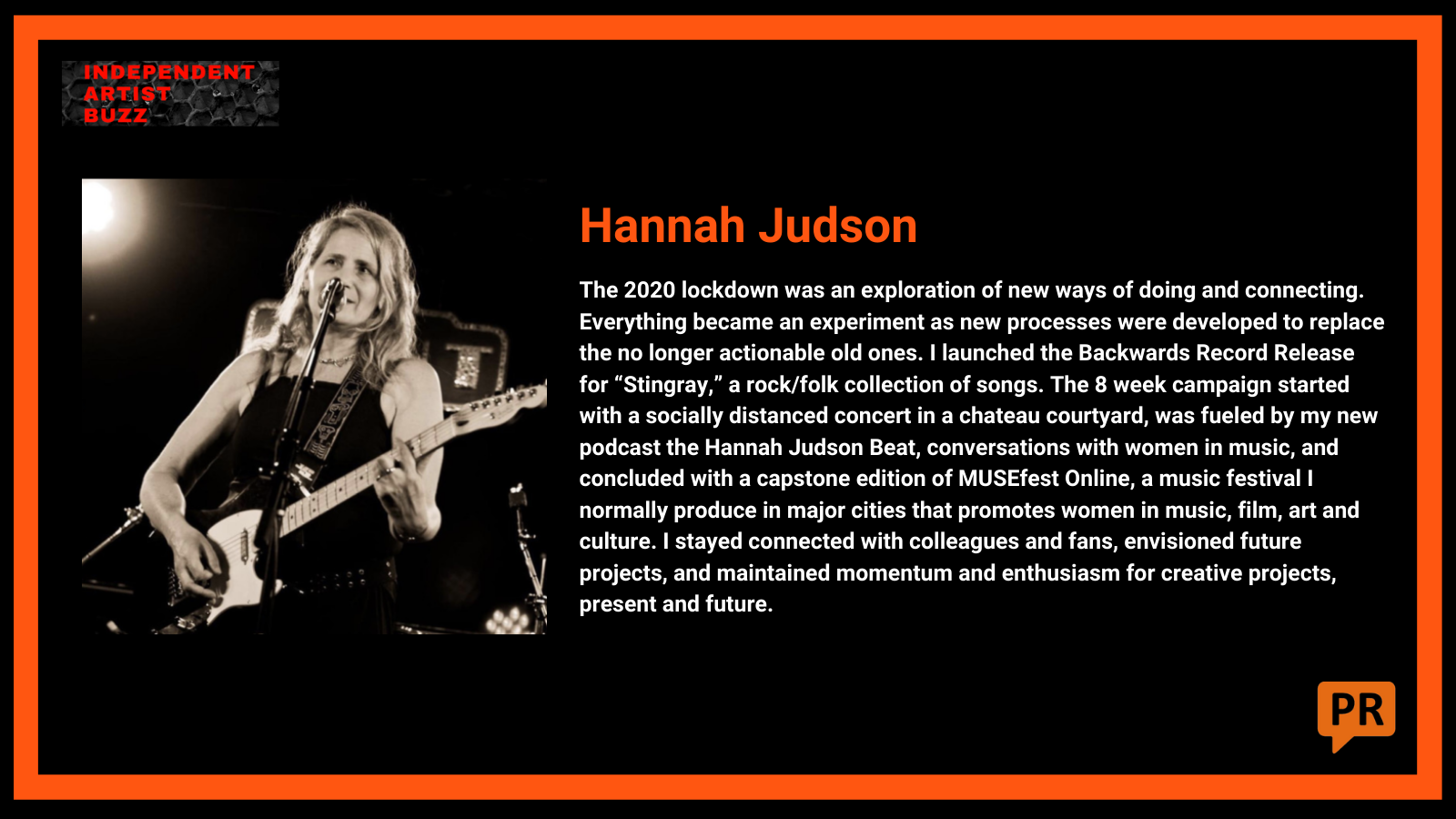 Launched The Backwards Record Release Concept  And It Worked!

The 2020 lockdown was an exploration of new ways of doing and connecting. Everything became an experiment as new processes were developed to replace the no longer actionable old ones. I launched the Backwards Record Release for “Stingray,” a rock/folk collection of songs. The 8 week campaign started with a socially distanced concert in a chateau courtyard, was fueled by my new podcast the Hannah Judson Beat, conversations with women in music, and concluded with a capstone edition of MUSEfest Online, a music festival I normally produce in major cities that promotes women in music, film, art and culture. I stayed connected with colleagues and fans, envisioned future projects, and maintained momentum and enthusiasm for creative projects, present and future. 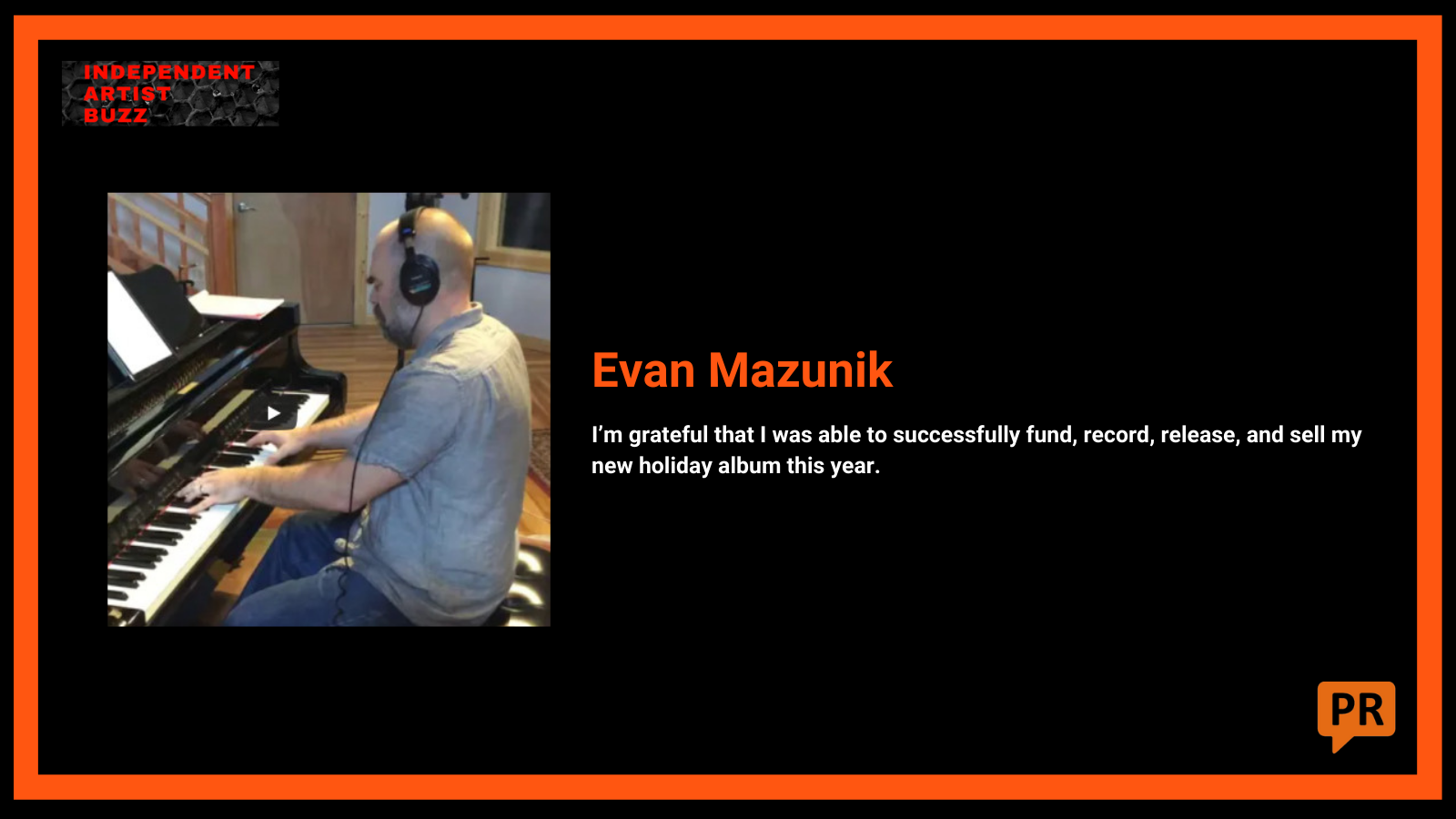 I’m grateful that I was able to successfully fund, record, release, and sell my new holiday album this year. 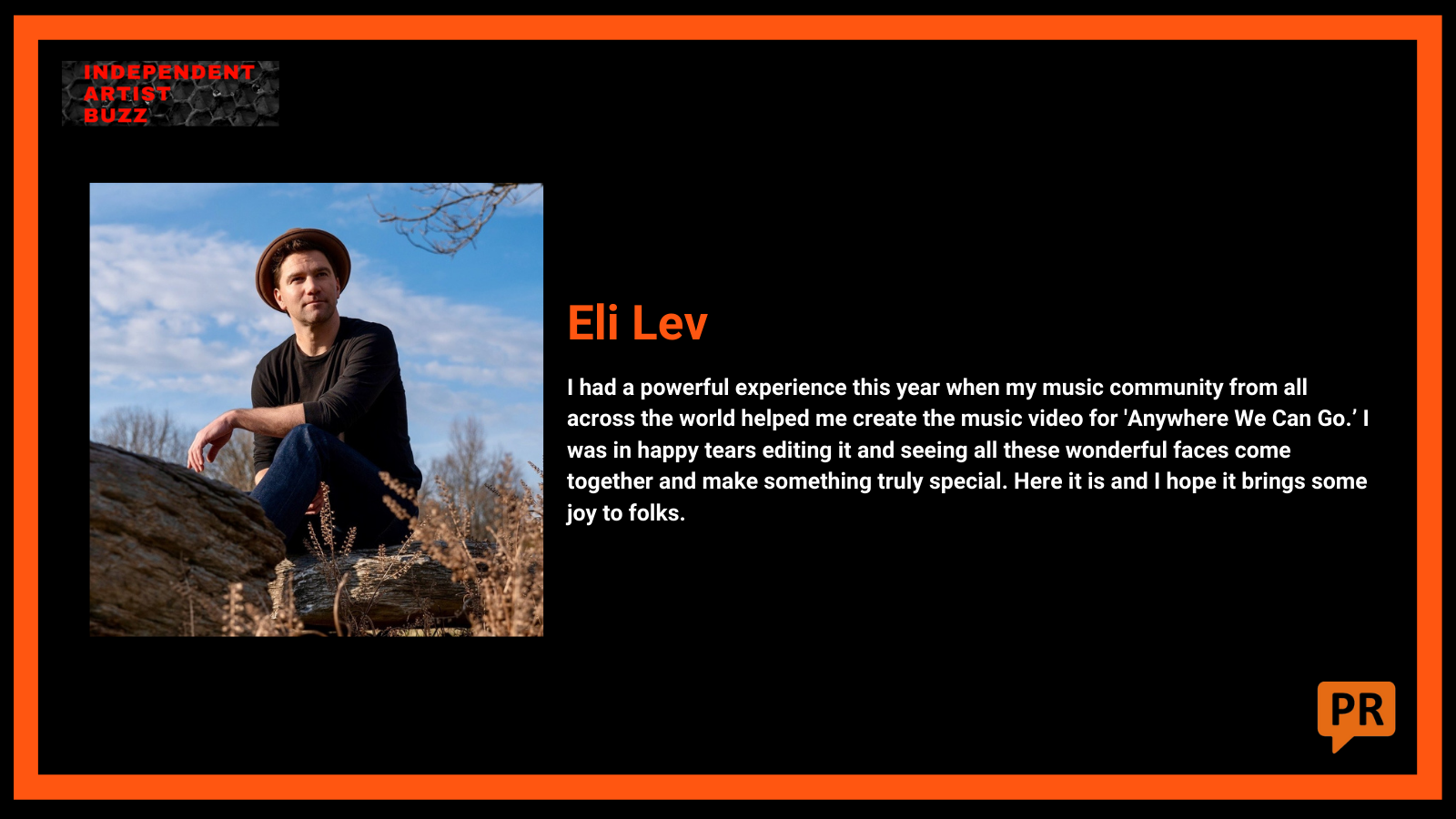 I had a powerful experience this year when my music community from all across the world helped me create the music video for ‘Anywhere We Can Go.’ I was in happy tears editing it and seeing all these wonderful faces come together and make something truly special. Here it is and I hope it brings some joy to folks. 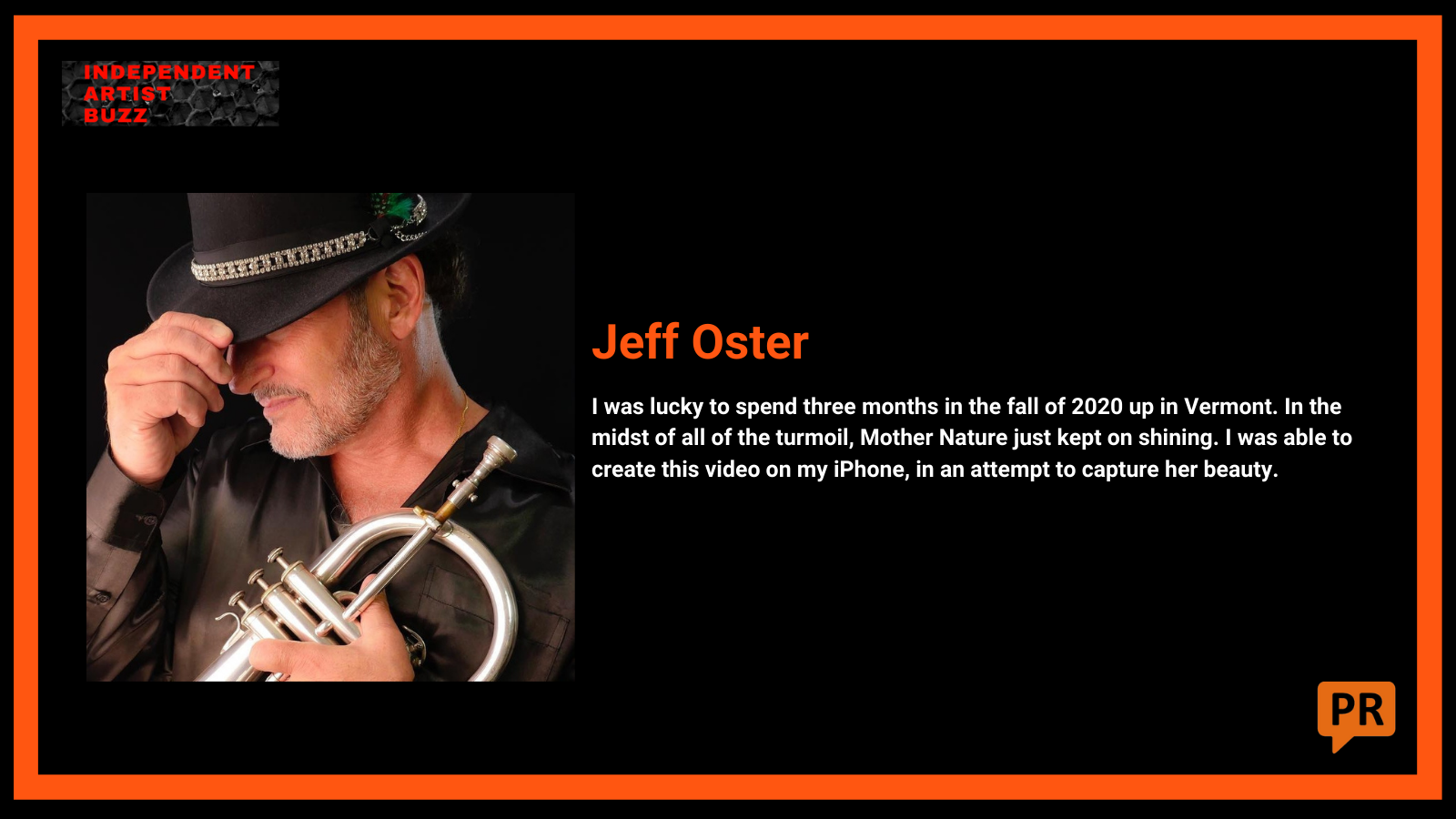 I was lucky to spend three months in the fall of 2020 up in Vermont. In the midst of all of the turmoil, Mother Nature just kept on shining. I was able to create this video on my iPhone, in an attempt to capture her beauty. 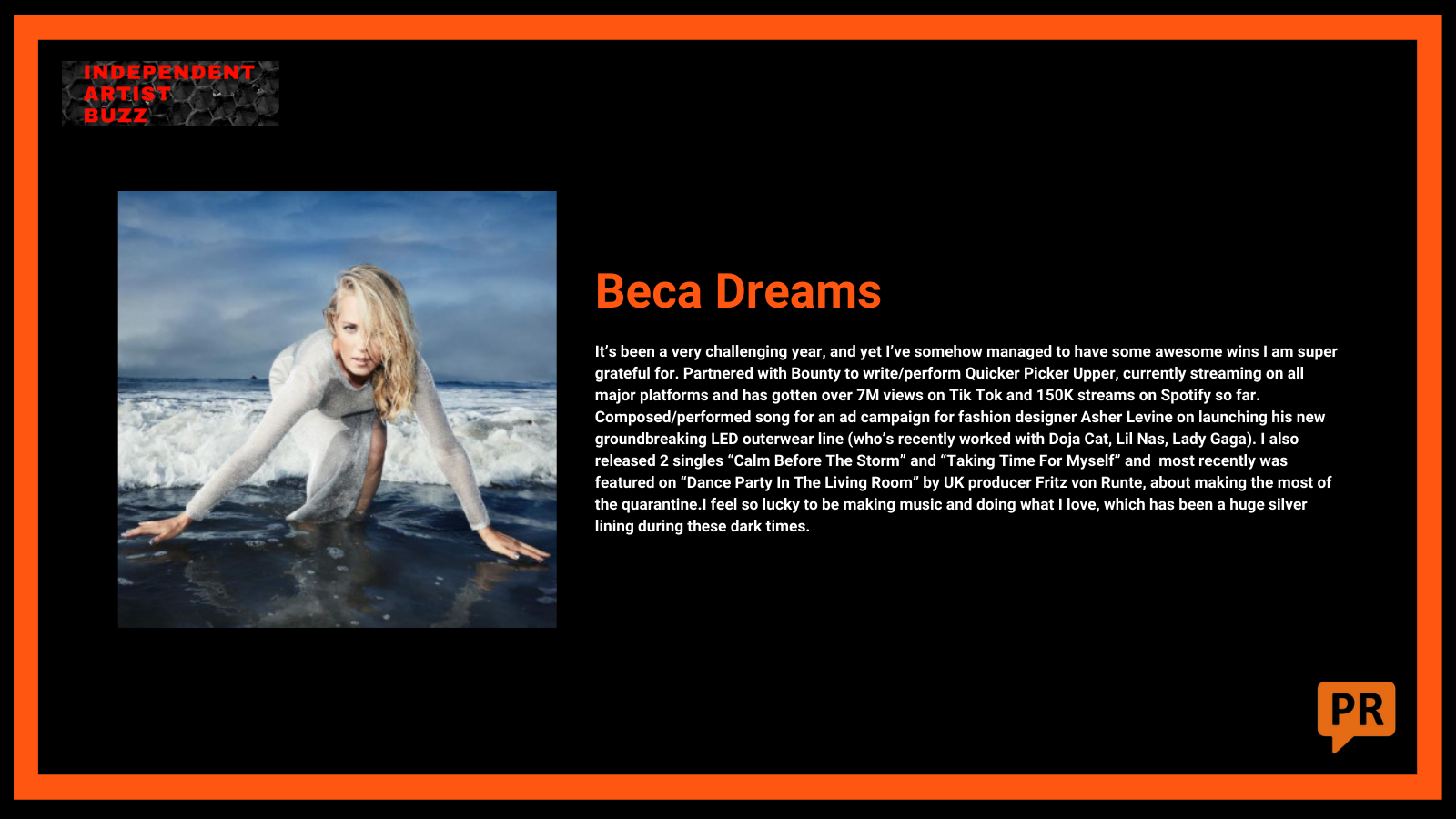 Beca Dreams | “Calm Before the Storm”

Had A Creative Burst That Resulted In Ad Campaigns & New Singles

It’s been a very challenging year, and yet I’ve somehow managed to have some awesome wins I am super grateful for.

Partnered with Bounty to write/perform Quicker Picker Upper, currently streaming on all major platforms and has gotten over 7M views on Tik Tok and 150K streams on Spotify so far. Composed/performed song for an ad campaign for fashion designer Asher Levine on launching his new groundbreaking LED outerwear line (who’s recently worked with Doja Cat, Lil Nas, Lady Gaga). I also released 2 singles “Calm Before The Storm” and “Taking Time For Myself” and  most recently was featured on “Dance Party In The Living Room” by UK producer Fritz von Runte, about making the most of the quarantine.

I feel so lucky to be making music and doing what I love, which has been a huge silver lining during these dark times. 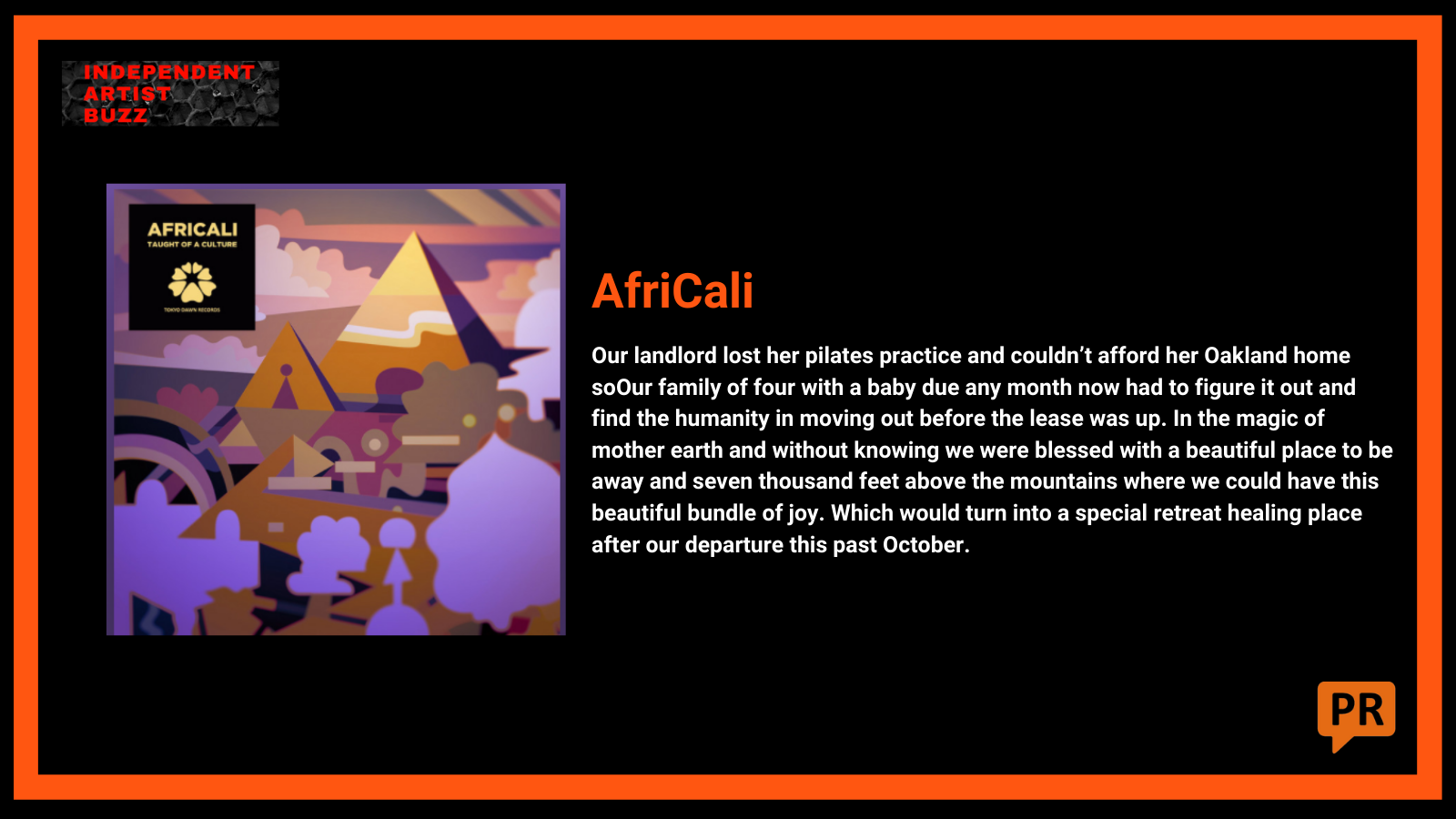 Turned An Eviction Into A Special Retreat & Healing Place

Our family of four with a baby due any month now had to figure it out and find the humanity in moving out before the lease was up. In the magic of mother earth and without knowing we were blessed with a beautiful place to be away and seven thousand feet above the mountains where we could have this beautiful bundle of joy. Which would turn into a special retreat healing place after our departure this past October. 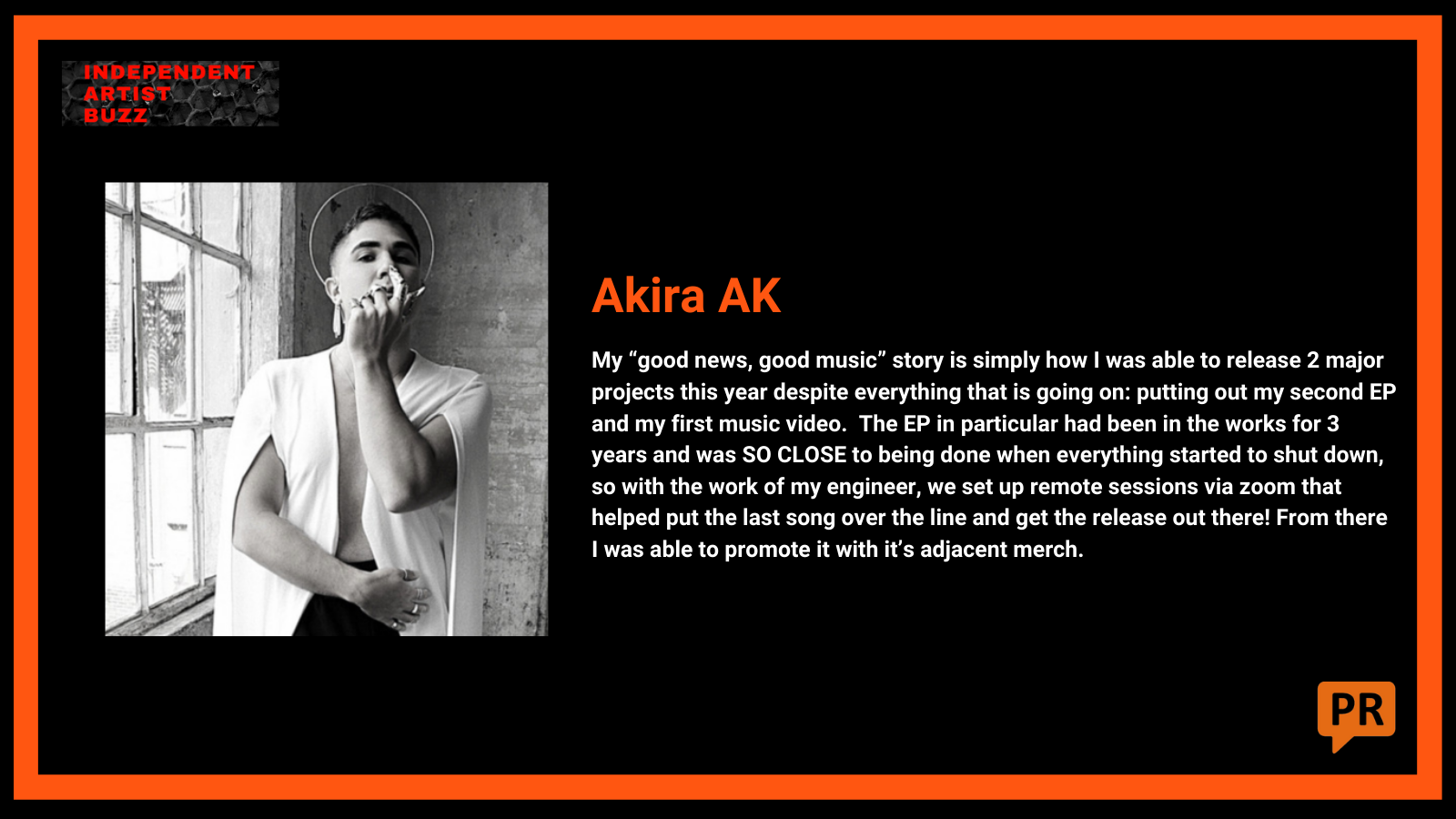 My “good news, good music” story is simply how I was able to release 2 major projects this year despite everything that is going on: putting out my second EP and my first music video.  The EP in particular had been in the works for 3 years and was SO CLOSE to being done when everything started to shut down, so with the work of my engineer, we set up remote sessions via zoom that helped put the last song over the line and get the release out there! From there I was able to promote it with it’s adjacent merch.

As far as my first music video is concerned; I was able to safely show up in person in NYC and film it with the help of a great videographer. The conceptualizing of the video is very special and I think speaks to the experiences some of us have had about going to that special place inside your head where you feel most powerful/comfortable/fierce to deal with whatever is going on externally. The promo for the video was also a success in terms of being able to schedule it on time and put it out there to hype the video itself. And once it was out it was really (unexpectedly) well received!

Those are just my personal success stories and I’m excited to see others’ as well! 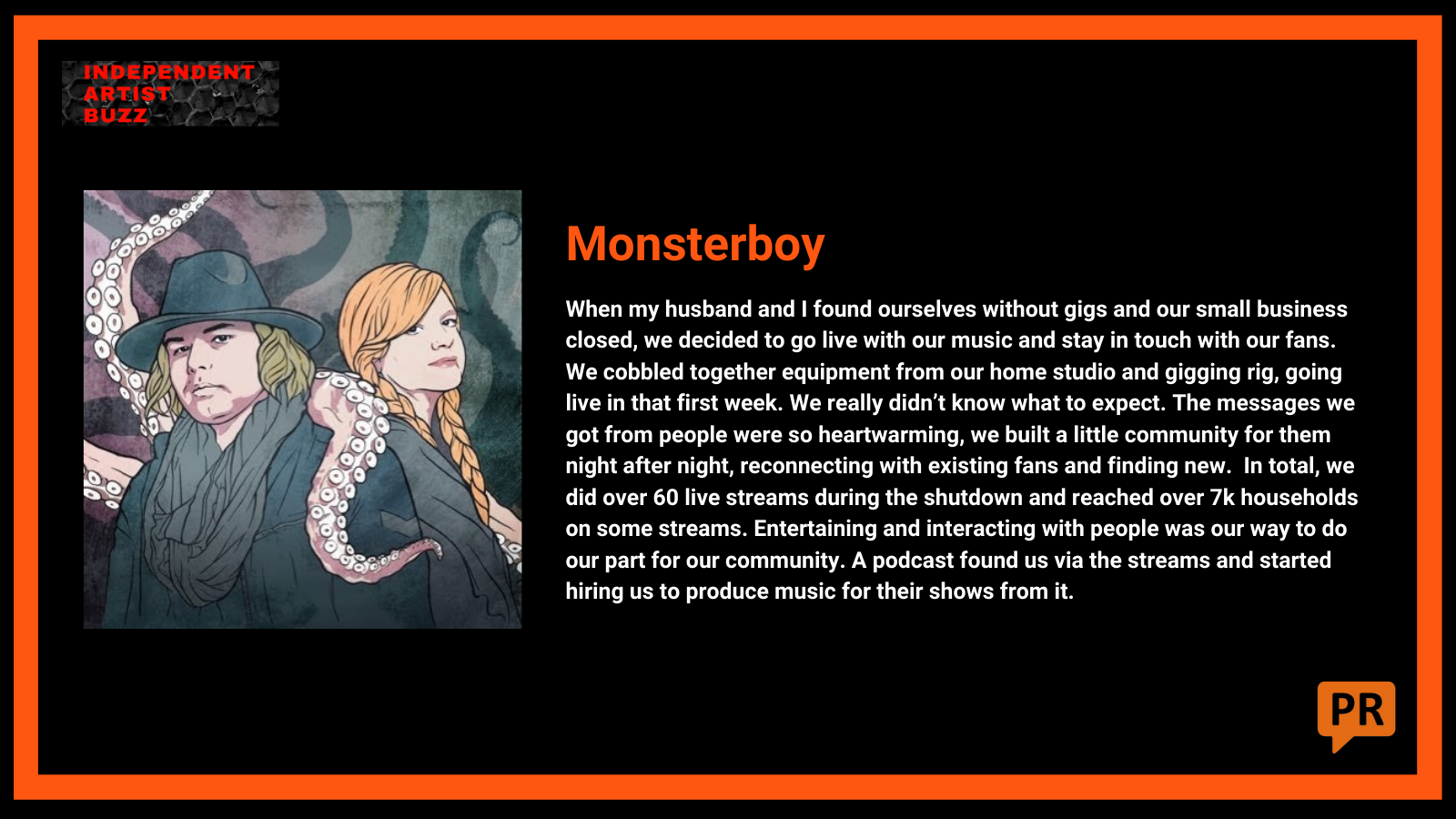 Monsterboy | “Ain’t Worth the Dime”

When my husband and I found ourselves without gigs and our small business closed, we decided to go live with our music and stay in touch with our fans. We cobbled together equipment from our home studio and gigging rig, going live in that first week. We really didn’t know what to expect. The messages we got from people were so heartwarming, we built a little community for them night after night, reconnecting with existing fans and finding new.  In total, we did over 60 live streams during the shutdown and reached over 7k households on some streams. Entertaining and interacting with people was our way to do our part for our community. A podcast found us via the streams and started hiring us to produce music for their shows from it. 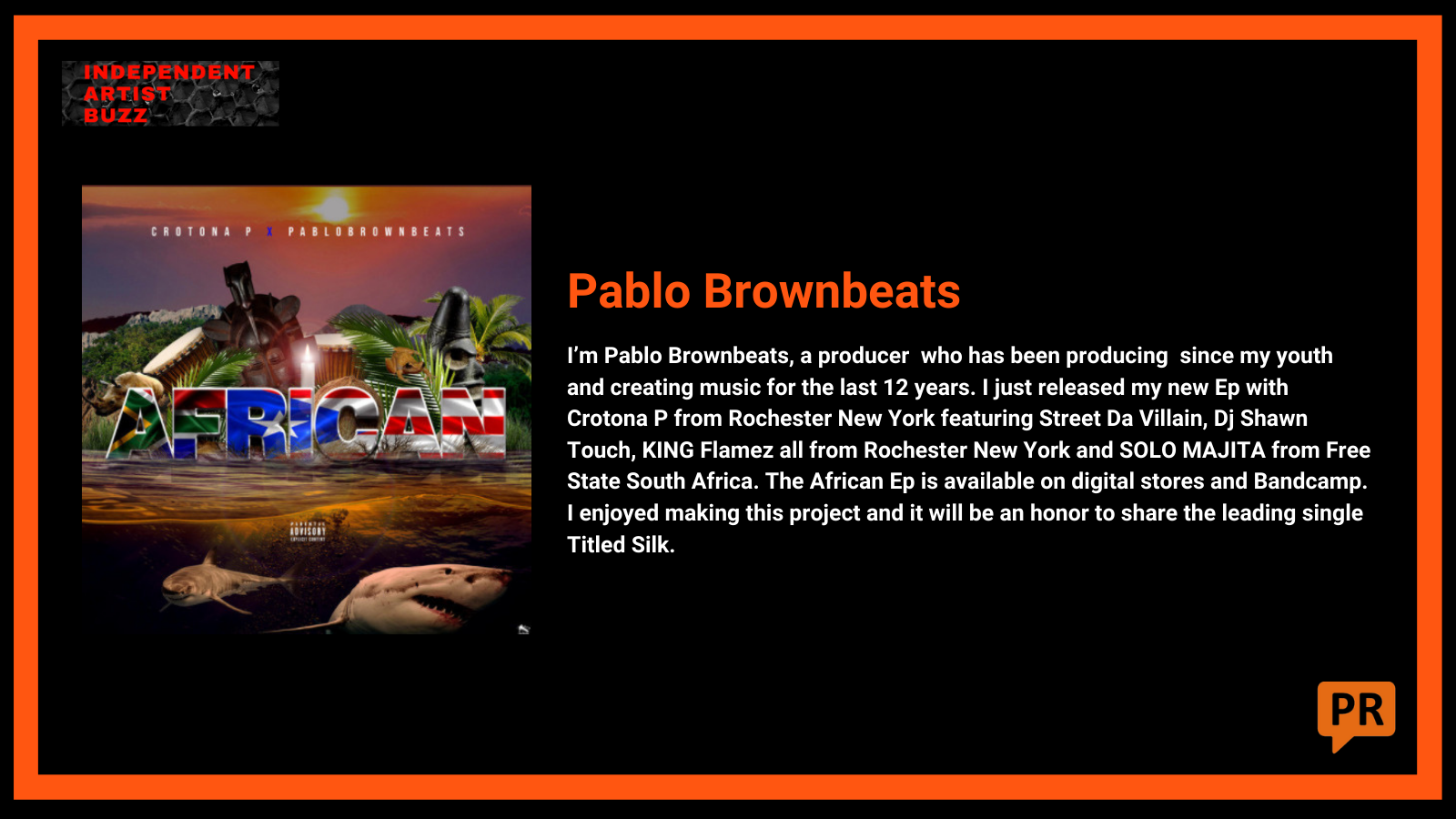 I’m Pablo Brownbeats, a producer  who has been producing  since my youth and creating music for the last 12 years. I just released my new Ep with Crotona P from Rochester New York featuring Street Da Villain, Dj Shawn Touch, KING Flamez all from Rochester New York and SOLO MAJITA from Free State South Africa. The African Ep is available on digital stores and Bandcamp.  I enjoyed making this project and it will be an honor to share the leading single Titled Silk.

This project was recorded during the  early days of Covid19. Me and Crotona met over Facebook and exchanged some few words and he agreed to do the single (silk) then African EP was born. 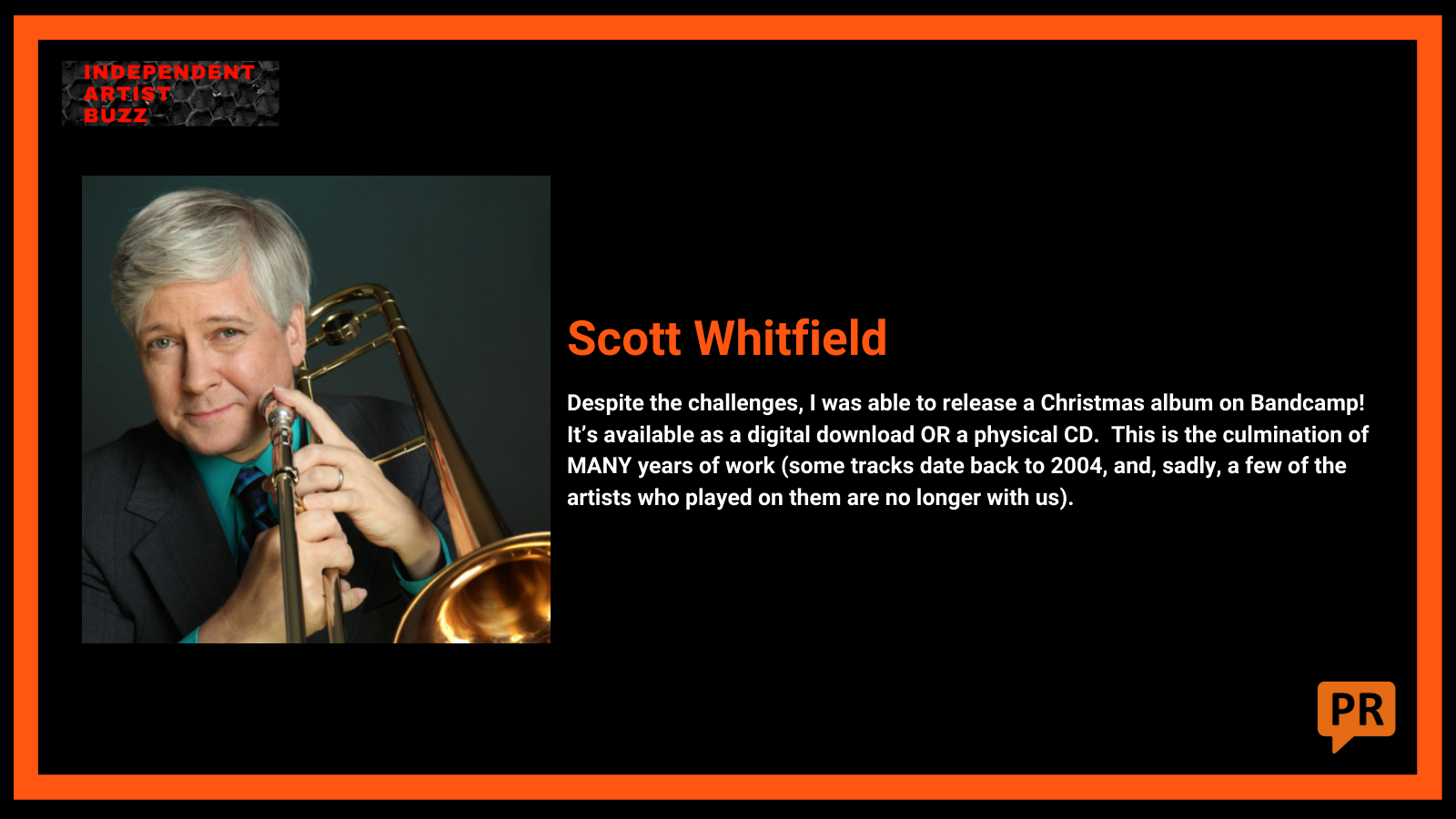 Released A Christmas Album That Features Artists Who Have Passed That Started Recording in 2004.

Despite the challenges, I was able to release a Christmas album on Bandcamp!  It’s available as a digital download OR a physical CD.  This is the culmination of MANY years of work (some tracks date back to 2004, and, sadly, a few of the artists who played on them are no longer with us). 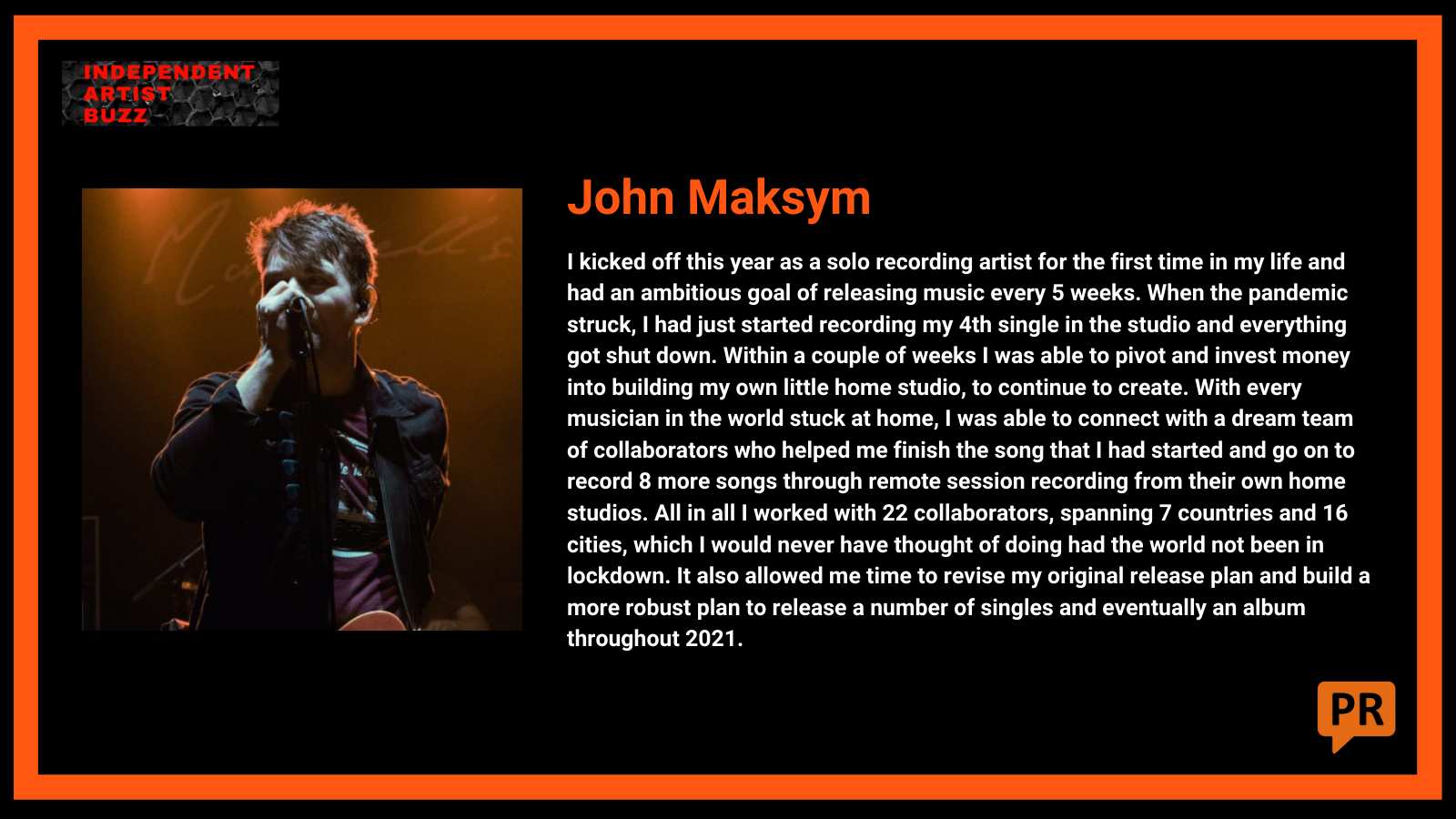 I kicked off this year as a solo recording artist for the first time in my life and had an ambitious goal of releasing music every 5 weeks. When the pandemic struck, I had just started recording my 4th single in the studio and everything got shut down. Within a couple of weeks I was able to pivot and invest money into building my own little home studio, to continue to create. With every musician in the world stuck at home, I was able to connect with a dream team of collaborators who helped me finish the song that I had started and go on to record 8 more songs through remote session recording from their own home studios. All in all I worked with 22 collaborators, spanning 7 countries and 16 cities, which I would never have thought of doing had the world not been in lockdown. It also allowed me time to revise my original release plan and build a more robust plan to release a number of singles and eventually an album throughout 2021.

Independent Artist Buzz is dedicated to bringing you the best in new music without genre boundaries.