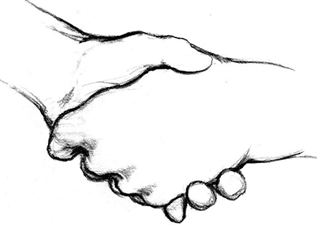 I wasted so much time playing open mics and writer’s nights in Nashville and Boston. The same is true of all the “hot new music sites” that spring up every 20 minutes on the Internet. The fans do not go there, you’re only entertaining yourself. Every open mic I’ve ever seen is a room full of musicians politely waiting for their turn to get on stage. These events only introduce musicians to other musicians and offer some live performance practice. Trying to sell CD’s at an open mic is like trying to sell timeshare condos at a telemarketing convention. Fans go to Facebook or iTunes, not Stereofame. I could waste all my time playing for a crowd of other broke indie artists or I can spend my efforts approaching fans where they’re already congregating.
– Matthew Ebel

I imagine this advice won’t apply to “concept bands” that have a specific theatrical act or image, but getting personal with my fans is what keeps me alive. Good music is barely enough to get fans to hand out 99¢ anymore; they have to be emotionally invested in the artist if that artist wants their loyalty. Don’t get me wrong, there can still be a “fourth wall” during a live concert or video, but real, meaningful connection with the fans is what keeps me in their heads after the show’s over (heck, even your “character” can interact with fans in-character). I chat with my fans via Twitter, Facebook, matthewebel.com and matthewebel.net, and as many other channels as possible. The more I interact with them between performances, the more I stay fresh in their minds and the more inspiration I draw from them.
– Matthew Ebel

19. Hand Out A Business Card

I made a card with a little album art, a website address and email – nothing more – and handed it out to anyone who asked what I did, or who even smiled at me at my gigs. The result? Well, even a long-time friend emailed me to say he was embarrassed to admit he’d never bothered to listen to me before, but after pulling my card out of his pocket and going to the website, he just bought all three of my CDs. He brought two friends to my last gig.
– Dudley Saunders

20: Don’t Just Give it Away…. Get Their Email Addresses

Trade your content for an email address. Many fans aren’t willing to pay for your music. That’s okay. But get SOMETHING for it. An email is next best. Artists who exchange email address and permission to market for a song download grow their mailing list 600% faster than those who do not. ReverbNation has offered this feature (as simple as checking a box on a song you upload) for almost 2 years and it works.
– Jed Carlson

21: Consistently Give Out New Material

Since I started posting either new videos or new songs every month, the open-rate on my emails has gone up drastically. And I’m getting emails from the friends of friends who have forwarded them on. I’ve been asked to do two high-profile benefits in the last month, one from someone who had never even heard of me before.
– Dudley Saunders

I’m not talking about eating a Whopper on stage and singing the Burger King jingle at every show. But… almost. I am talking about finding companies that you have passion for and a connection to and finding ways to help each other. Almost every company can benefit from the coolness factor that comes from Music and almost all music can benefit from the money that corporate America spends. But more than that if you find alliances with integrity you can in good conscience introduce your fans to theirs and vice versa. Merging communities. Our example of this is Templeton Rye Whiskey http://www.templetonrye.com . We wrote a song called Templeton Rye about a prohibition era bootleg whiskey. A few years later someone launched the brand. We worked together to find ways to help each other. They use our song, we drink their whiskey, they talk about us in the press, and we talk about them in the press. We play events for them, and they pay us money. They have a huge fan base. This is a brand that and we are intricately woven into and we are proud to represent. I think you can benefit from this type of relationship in many different kinds of companies or entities. It doesn’t have to be a big corporation. If you have like tattoos, and you have an artist you like, talk to them about working together. Go to tattoo shows with them, give them music, invite them to your shows, etc. Pretty soon, their fans are your fans and visa versa.
– Jason Walsmith / The Nadas

23: Interview Your Fans – Find Out What They Want

When I began asking them specific questions about who they were and what they responded to in my music, I noticed that lightly-engaged fans began to turn into evangelical fans. Plus, I began to see what actually made them care about my work – which was not at all what I was putting in my press releases.
– Dudley Saunders

24: Stay In Touch With The Local Media In Your Home Town.

Sandra Okamoto, a writer at local paper for 3 decades who has been following her career at Columbus Ledger Enquirer (Georgia), will write large feature article on album release and get prominent placement on cover of Sunday Lifestyle insert.
– Jennie Walker

25: Create Relationships With All Types of Media Makers

Learn the difference between persistence and insistence. Insistence is trying to jam a square peg in a round hole (like badgering a music supervisor for Mad Men to put your hip-hop track on the show – it doesn’t fit, so stop it). Polite, informed, persistence lets the gatekeepers know you think you are worth placement in their shows, but have a respect for their busy and pressure-laden jobs. If you are submitting to a show, make sure you’ve seen it! Make sure you heard the radio program to see if your music fits.
– Derek Nicoletto

26: Do EVERY Piece of Press Available

Screw Rolling Stone/Blender/Wired. Unless you’re a Top 40 household name, you haven’t earned their covers and you’re not gonna get ’em. Be humble while reaching for the stars…there is no piece of press too small. More importantly, press leads to more press, so say yes to everything that serves your career goals. Also, ASK FOR MORE. If you have a song picked up on a podcast, ask them if they’d like to interview you. If they interview you, ask if they’d like you to perform live on their show. Ask for more; push it to the next level of exposure. It’s SuperSizing. Nine times out of ten, when their format allows for the deeper coverage I’ve asked for, they’ve given it.
– Phil Putnam

Pick one, one you have a connection too. One you are passionate about. Get involved. Don’t just play shows, attend events, and become associated with that cause. If you’re lucky, you may become associated with and become the face of that organization. Then all of their promotional power helps promote you. This may sound greedy, but remember, you are helping the organization you believe in. Everybody wins.
– Jason Walsmith / The Nadas

28: Get Involved With Your Home Town

If you promote your city your city will promote you. Probably won’t work in NYC, but maybe. Have you asked the mayor what you can do to help?
– Jason Walsmith / The Nadas

This only works if you started you career in a college town. For us it was a few Iowa College towns. These organizations are always trying to get their alumni together to relive the glory years. May as well be at one of your shows. If nothing else they usually have websites and newsletters and are willing to promote your shows.
– Jason Walsmith / The Nadas