When I first heard that Ellis Paul an artist I have know about for years and seen one a few occasions raised $100,000 I was amazed…I had to get the story.  Here it is.

Ellis Paul is an American singer-songwriter and folk musician. To date, he has released 16 albums and has been the recipient of 14 Boston Music Awards.  He has published a book of original lyrics, poems, and drawings, and released a DVD that includes a live performance, guitar instruction, and a road-trip documentary.  As a touring musician, Ellis plays close to 150 dates each year and his extensive club and coffeehouse touring, together with radio airplay, has brought him a solid national following.

Rachael Klien from Ellis’s management team answered these questions for Ellis while chatting with him on the phone while he drove from Virginia to Atlanta.

Ariel Hyatt: Do you believe that 1,000 True Fans is a theory that can work?

Rachael Klien / Ellis Paul: Yes absolutely, Ellis has sustained his career as a musician for the last 20 years. I would even go so far as to say that this has been his theory from the get go.

Starting out in the Boston Music scene then taking it on the road developing fans one by one. (Mind you. this is before the Internet existed, and back in the cassette tapes days) Ellis got in his car driving city to city creating really loyal fans. He traveled around a lot building each market. Talking to each person before and after shows, staying in touch as he traveled.  People are willing to buy your record spend a couple hundred if they are really committed.

Ellis just left his record label of 15 years to go it on his own. We raised $100,000 in fan contributions from about 300 fans, which we believe to be the ultimate testament to his fan loyalty.

AH:  Are you currently making a full-time living as a musician from your music?

AH: How many years did it take you from day job to part time job to F/T Musician?

AH: Can you give us a breakdown percentage wise of the following:

E. Other? Please name what the other categories might be.

AH: If possible (I know you may not want to share this information), can you share the amount of money you have grossed in the last 12 months, broken down by months correlating with market, and promotional, and touring efforts? Don’t mind sharing I think it’s valuable to musicians.

RK/ EP: Ariel we are happy to share this information, Ellis thinks this is valuable to other musicians. But the breakdown I would need a little more time to breakdown.

AH: How many die hard fans, fans that will buy everything and anything from you, would you imagine that you have?

AH: How long did it take you to build up this many fans?

AH:  Do you have a strategy with long-term and short-term goals in place to get to 1,000 true fans or for any future looking aspects of your music career? If so, can you share these goals?

RK/ EP: The direct contact that people get from being with and experiencing the creation of a community. We want to continue to form a tribe around my music and career. Finding ways to connect, special events, blogs, Youtube videos that bring them into my world.

It’s more than the name in the mailing list and a friend on Facebook or MySpace. It’s about getting them involved deeper than just listening to the music.

RK/ EP: Not really. We have spread the word about videos, CDs on sale, sent out special downloads. But, we have not used these forms of networking for commerce. Not saying we shouldn’t and we probably will. But I feel a little like this is a place to connect, which is the number one reason they become such loyal fans. The personal and intimate conversation via these sites, helps them to get to know me and want to come to shows, buy CDs and pass my music on to others.

AH: What are your next steps to continue to help yourself move forward in your own career?

RK/ EP: Trying to branch out and get the next 2500 people. Finding the audience in places we haven’t looked yet.  Start doing podcasts, more movie placements, getting the songs out there in unconventional ways. We are creating ways now so that we can get the fans involved to a level that they want to pass it around. It’s no secret that the viral nature of the Internet is the key and we are exploring some unique ways to do this.

AH: If you could give a band or artist any type of advice on how to start in social media, what would you advise them to do?

RK/ EP: Connect on a personal level. Create interesting video blogs, do video versions of songs. But really, keep in touch on a personal level THAT is where the casual fan turns into a loyal one. Driving 200 miles to see your shows, going to two shows in a row in the region they live and bringing friends to every show to introduce my music to them.

AH: If you had $500 to spend on marketing and promotion, how would you spend that money?

RK/ EP: Do a really great video for Youtube that is worthy of getting passed around. Maybe even hire someone to get it posted every were possible that helps it catch wind in it’s sails.

AH: Is there anything else you would like to say about 1,000 True Fans?

RK/ EP: The concept is to get locked into being a part of a group. Getting message out that attracts people who affect the members of the tribe.

AH:  How do you use analytics to your advantage? What are your measurable online results, and how do your measures help you with your music career?

RK/ EP: We completely redesigned the website based on the analytics. We were able to see where everyone lands, exits and spends time.

At the moment we are working to get photos and video on the sidebar of the tour page… this is by far the most popular page. So we want the tour page to be interactive so they stay on the site longer and keep clicking stuff that lands them hopefully to buy stuff.

AH: On a scale of 1 to 10, would you say you share a lot (a 10) or are you guarded in what you exposure on social media sites about yourself and your personal life?

AH: What would you say to a fellow musician, that thinks that Twitter is just sharing “eating a tuna sandwich” and is stupid?

RK/ EP: It’s as stupid or as useful as you want to make it. But I feel if your going to write about a tuna fish sandwich at least post a picture with a bit out of it or write a Haiku about it, with seventeen syllables you can make your tweets interesting and great.

We have seen a difference in each inane tweet. But I am not into just posting things like that. But you know what? People love it for whatever reason.

The platform that Ellis used to help him raise his money was Nimbit. They have created a case study outlining the actions that the team took and the tools that they used on the Nimbit Platform they have generously allowed me to share it here with you:

Goal: Create a direct to fan relationship with 100k fans that he can sell/promote his new release “The Day After Everything Changed”

How Ellis Did It: Step-By-Step Execution:

Here is an example of how Ellis bundled the offerings for the:  $1,000 “The Johnny Cash Level”

1. Receive an advance copy of Ellis’ new CD personally signed and numbered; including a bonus disc of demos and outtakes of the songs

3. You and a friend will be put on Ellis’ guest list for an Ellis Paul show of your choice

6. Ellis will thank you by including your name in the liner notes of the CD booklet

7. Ellis will handwrite and illustrate lyrics to any one Ellis Paul song of your choice, which will be suitable for framing

8. Limited Edition 11x 17 signed and numbered cover artwork from the new album, which will be suitable for framing

Step 2: Send advance copies of new album to every contributor with a personal note and a download card to pass along only to people they knew that are/could become a “true fan.”

Step 4: Album art features image of picture of Ellis over a lake with a vintage guitar in his hands. Some people think it’s a fake, but it’s from an HD video.  Creative team and Nimbit decide to post video on YouTube (http://bit.ly/4nOAMo) and spread the word around social networks creating viral buzz.  Over 6,000 views help drive traffic to website, increasing sales and exposure.

Step 5: Put download card into all orders of the CD encouraging purchaser to share the music with a friend.

“We awakened fans that had been disconnected for many years.  Fans that had not been to see him in 10 years were now coming out to shows and getting reconnected with all his work.

Many donors were just waiting to have an opportunity to help him financially. We made sure they had several copies to spread the word.  And the higher contributors get as many as they want to give away to people.  We do feel we are spreading the music in a more unique and efficient way.  If Ellis was on a record label, we’d have buy the disc from the label at $7 each.   Because the CD costs us so little to manufacture with Nimbit, we’re able to market the CD more rapidly and at lower cost.  Nimbit’s Facebook app, download cards, and other direct to fan platforms helped us get to more of our fans quickly and easily.

I hope that this interview inspires you to begin to think differently about just how powerful your fas can be.  Do You Use Nimbit?  Have you bundled products together to sell?  If so I would love to hear your about experience here….

Looking for more info on crowdfunding for musicians? Check out Part 9 of Cyber PR’s free course, Social Media House! Click the picture below to get started. 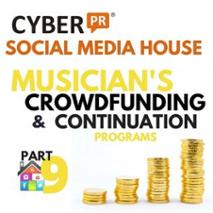